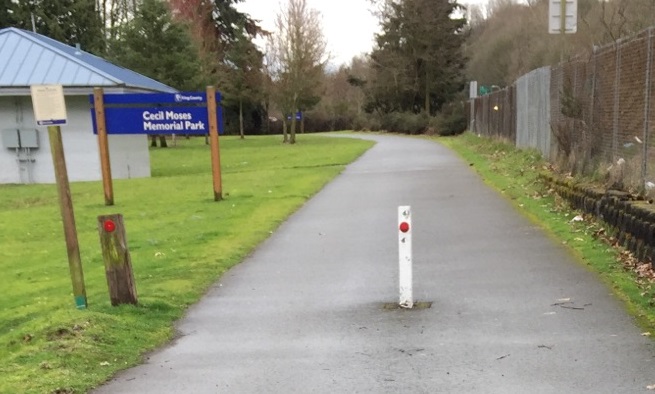 While riding through the Cecil Moses Memorial Park the victim struck an unmarked bollard that had been installed in the middle of the path.  There were no warning signs or required pavement markings to alert bicyclists of the metal bollard as required by state and federal design guidelines. D.S. fractured his cervical spine and was taken to Harborview Medical Center where he underwent emergency surgery.

D.S. was diagnosed with fractures to the C2/C3 vertebrae, considered the most serious of cervical injuries.  D.S. has been rendered a full quadriplegic—paralyzed from the neck down. As a result, D.S. will require 24-hour care and future medical treatment costing several million of dollars.

Initial investigation into the accident suggests that the bollard and paved path were not marked or designed appropriately as required by WSDOT and federal standards and guidelines.  In addition, there may have been prior bicycle accidents involving this same bollard.  There may have been prior complaints made to city and county officials about the unsafe features associated with this bollard and the section of the trail.

Call For Witnesses Or Others With Knowledge

Investigators working for Davis Law Group are looking into the circumstances which caused this accident.  They are also looking for individuals who may have knowledge about the history of crashes at the section of the trail where this incident occurred.

Attorney Chris Davis is asking that any persons who saw this incident; who may have come upon the scene after the crash; took photos/video; anyone who may have tried to offer assistance on the scene or who had any contact with any of the victims; or anyone who has any information about the accident to please call Davis Law Group at 206-727-4000.

In addition, any bicyclists that are familiar with the area and have previously witnessed accidents in this location or who have reported the bollard to be unsafe to local officials are encouraged to contact the firm.

Bollard - Single post bollards are often used in bike paths to prevent entry of motor vehicles and/or to divert traffic.  When a bicyclist moving at even a slow speed runs into a bollard, common outcomes include serious injury or even death.