Founder, Attorney at Law
Connect with me

Christopher M. Davis, founder of Davis Law Group, is an accomplished attorney with nearly 30 years of civil litigation experience. He is a zealous advocate for injury victims and their families with a proven record of success. Davis has a reputation for exceptional results, professionalism, and integrity.

Davis is passionately devoted to advocating for the legal rights of injury victims and their families.  He is the recipient of numerous awards, honors and distinctions; is frequently interviewed by the news media regarding his most notable cases; has achieved exceptional results for his clients; and has hundreds of positive client reviews, testimonial videos and thank you notes from clients and community members.  Davis is the author of a number of different informative books and reports on various injury law topics, the Washington Accident Books.

Mr. Davis spends every day defending the rights of injury victims and their loved ones. Davis Law Group is also a strong supporter of Mothers Against Drunk Driving (MADD). You may have seen attorney Chris Davis on local or national news programs discussing the firm’s high-profile cases or offering commentary on other legal issues. Mr. Davis is a frequently sought-after personality known for regularly appearing on television and radio news programs as a legal analyst and commentator or to discuss other noteworthy cases. 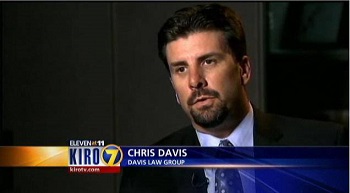 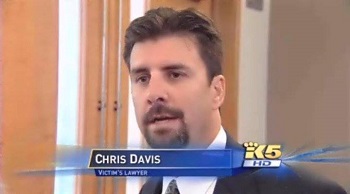