"I got more than I was expecting"

Our client was involved in a DUI wreck, getting into the car with a friend who had been drinking. After being in the hospital for a week and medical bills piling up, he and his family made the smart decision to contact attorney Chris Davis and the drunk driving accident lawyers at Davis Law Group, P.S., for help. 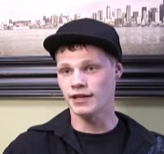 I got into the car with my friend. We were drinking and I let him drive. I fell asleep and the next thing I knew I woke up in the hospital. They told me that I'd been in a coma for a couple days and that my friend had left the scene.

I got out of the hospital and about a week later after my mom had been talking to people, she suggested that I get a lawyer. The reason was because I was left in the car, that my friend put me in that situation, and then kind of let it all fall on my shoulders and [my mom] didn't think that was right. I did agree with her.

My mom talked to a couple friends, like my aunt, and she has a lawyer in her family. They suggested Davis Law Group. They just said he's a good lawyer, just thought you guys were pretty professional. It was all new to me, but you guys are all top of the line, communicated with me a lot. You guys kind of helped me understand it all.

It was really like I didn't have to do anything. Everything turned out great and I got even more than I was expecting to get. I would definitely recommend the Davis Law Group.