“Don’t try fighting by yourself…They helped me a lot and I don’t have the words to thank them.”

Guadalupe called the award-winning car accident attorneys at Davis Law Group after he was badly injured in an accident. Below are his own words detailing his experience as our client: 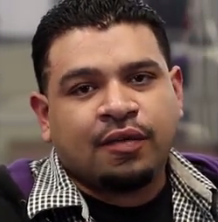 I almost lost my eye and pretty much got scalped from the back and then ended up in the windshield and I was just looking around.

They told me it was pretty hard for the insurance like to get anything for the hospital to get it taken care of and I just really didn’t know how I was going to pay for like for a big amount, like the whole thing and the account on my bill. I just saw Davis Law Group on the internet and he just looked like, they just looked like they 5 star ratings and saying he was aggressive and his group, they wouldn’t take no for an answer in other words. And they like really helped a lot of their clients out and I just chose them.

With Laura, she was the first conversation that I had. The first time I called in she went to go visit me at my house and we got some pictures done as soon as the accident happened. And then I met Greg down in Yakima and everything. He was pretty much good help because he would joke around with me; I felt comfortable with him and comfortable with the whole group. Even though I was with Laura just speak with her on the phone the day I met her too she was pretty much the person I thought she was on the other side of the phone. Just there to help and really did a lot for me.

The best advice is to just give Davis Law Group a call. I recommend the Davis Law Group. Hopefully they can take their case and you know, don’t try fighting it by yourself because it’s a lot of work and they can help. They helped me a lot and I don’t have the words to thank them.