Damon Matz is a previous client of Davis Law Group, P.S. who suffered significant injuries in a car accident with a vehicle that had pulled over on the freeway without any emergency lights, causing Damon to crash into the vehicle.

At first, Damon received a great deal of resistance from the at-fault driver's insurance company because there was not enough medical evidence to prove the extent of his injuries. The personal injury lawyers at Davis Law Group advised Damon to seek a second opinion from a different doctor, who eventually found that there were underlying issues contributing to his injuries and that he would eventually require neurosurgery to correct the issue.

Because Damon took the time to seek a second opinion about his diagnosis, doctors were eventually able to determine what was going on and how to help him regain full control of his left arm. 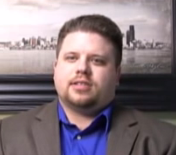 It was a foggy morning, the guy was stopped on the freeway and didn’t even have his flashers on or anything. I tried to swerve out of the way and I hit him at about 55 mph.

At first, I lost the strength of my left arm and was not able to pick up my son – he was a newborn. I couldn’t move my head from left-to-right very well, and the doctors were saying it was a sprain-strain kind of thing. I went to physical therapy and was getting some strength back but I wasn’t getting all of the strength back in my left arm. My doctor said, “Hey, you might just have diminished strength now,” because of the whiplash.

If it wasn’t for Barb here [at Davis Law Group] telling me to get a second opinion, I wouldn’t have found out that I needed to have neurosurgery because I had a disk that had compressed, of course, but when it went back it didn’t fully go back was making a calcium buildup that affected the electrical current going to my left arm from my brain. If she hadn’t mentioned that, I would have settled and had to pay thousands upon thousands of dollars later on and not be able to hold my son or anything like that because of something that my first doctor missed.

If it wasn’t for Davis Law Group telling me to get a second opinion just in case, I wouldn’t be 100% healthy and be able to play with my son and everything to this day.