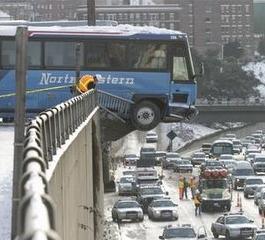 People who take advantage of Washington state's public and private transportation systems, such as ferries, street cars, buses, and shuttles expect those systems to be safe. But operator error, mechanical failures, and other dangerous conditions contribute to multiple accidents involving Seattle and Puget Sound area transportation systems each year.

The bus accident attorneys at Davis Law Group work on a contingency fee basis, meaning there are no up-front costs to hire us. Call our office at (206) 727-4000 today or use the contact form on this page to get started.

Bus Accident Lawyer in the News

As a lawyer with experience handling serious bus accident claims, attorney Chris Davis' expert legal opinions are often featured by the Washington state media covering transportation-related issues and specific bus incidents that have occurred in Washington state. You may have him on local stations such as KING5, KOMO4, KIRO7 and Q13Fox.

If you have been in a bus accident in Washington state, investigators from the specific transit service will most likely want to interview you. It is advisable to retain an attorney before making any statements to investigators.

A skilled lawyer can help you avoid saying anything that could later be used to deny or minimize your claim. Even if you've already spoken to investigators, it's still important to contact a lawyer in order to begin an independent investigation into what actually happened.

READ: What will happen if I'm injured in a bus accident?

Most Common Causes of Bus Accidents

Determining the cause of a bus accident is important, as the causes determine who’s responsible for your damages. Sorting this out is one of the first things an experienced bus accident attorney will do while working on your case.

The most common causes of bus accidents include:

Who is Liable for Bus Accidents in Washington State?

There are several ways in which evidence can be used to support a bus accident claim, including video surveillance, dashcam footage, witness statements, and even cell phone records. An experienced bus accident lawyer will investigate all potential theories of liability, including:

Commercial insurance companies fiercely defend bus accident claims, especially in cases where the victim's medical bills and pain and suffering are high. That’s why it is usually a good idea to consult with an attorney who has experience handling bus accident cases if you’ve been involved in an accident and any of these issues arise.

A qualified lawyer can investigate the facts of your bus accident case and figure out who’s legally liable for your injuries, while also advising you on the best course of action. Most personal injury attorneys work on a contingency fee basis, which means that all attorney's fees are paid when the case has been successfully resolved.

While transportation in Seattle and the Puget Sound region is largely by automobile, buses and other mass transit modes are gaining popularity. In the last decade as Seattle's population has grown, transit via bus has played an increasingly important role. In 2017, nearly half of commuters to downtown Seattle arrive via mass transit.

The following are the types of buses/mass transit that may be involved in an accident:

People who are injured in a bus accident — involving a commercial bus or other mass transit vehicle — may be legally permitted to recover financial compensation for damages they have suffered as a result of the accident. Examples of the types of damages recoverable in bus accident cases include:

When do You Need a Bus Accident Lawyer?

The Statute of Limitations (SOL) for bus accident cases in Washington state is typically three (3) years from the original date of the bus accident, which means that all injured victims have a limited time to take the necessary steps in order to pursue a bus accident claim.

Failing to file a claim within this time can result in the case being dismissed altogether and accident victims being left to deal with the costly medical bills and other damages on their own. This can cause significant financial hardship for victims and their loved ones.

Davis Law Group's award-winning team of car accident attorneys has represented countless bus accident victims since being founded in 1994. We understand the nuances of pursuing a legal claim against a powerful company or government entity, and our legal strategy has proven to get our clients the best possible results.

We also have the capacity to hire qualified experts to support our clients' cases, which provides additional negotiating leverage and motivates greedy insurance companies to resolve cases fairly and reasonably.

If you or a loved one is suffering after being injured in a bus accident, it is likely in your best interests to consult with an experienced attorney about your rights and options. Our award-winning legal team can help you determine if hiring a lawyer may improve the value of your case and what your legal options are moving forward.

We offer a free case review to anyone who has been injured in a bus accident. If we believe we can help, we'll schedule you for a free legal consultation with our attorneys. Use the confidential contact form on this page to get started or call our downtown Seattle office at (206) 727-4000.

Bus Accidents in the News