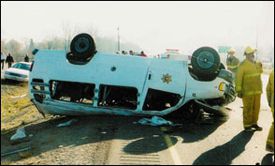 Passenger van accidents are a frequent occurance in Washington State.  Because passenger vans are relatively inexpensive compared to school buses, they have become popular for transporting church groups, school children, the elderly, sports teams, airport shuttle passengers, and other groups.

The passenger van accident attorneys at the Davis Law Group represent seriously injured victims and the families of those fatally injured in 15 accidents in Washington state.

Attorney Chris Davis is one of the most respected and recognized attorneys practicing in Washington State. You may have seen Mr. Davis on local or national news programs discussing the firm's high-profile cases or offering commentary on other legal issues.

If you or a loved one has been seriously injured in a passenger van accident in Washington contact Davis Law Group at (206) 727-4000 to discuss your case for free.

It’s important to know that 15-passenger vans handle differently than other vehicles, especially when fully loaded.   Fifteen-passenger vans should only be driven by experienced, licensed drivers who operate this type of vehicle on a regular basis and who have a commercial driver’s license.

Some of the most common causes of accidents involving 15-passenger vans are:

According to the National Highway Traffic Safety Administration and National Transportation Safety Board, passenger vans are prone to rollovers when at or above capacity. Passenger vans are not required to be manufactured to the same federal motor vehicle safety standards as traditional yellow school buses. For example, FMVSS 111, 131, 220, 221 and 222 are not required in the manufacture of vans. As a result, these vehicles do not provide the same degree of occupant protection to passengers that school buses do.

According to the National Highway Traffic Safety Administration (NHTSA), 41% of passenger van occupants killed from 2007-2016 were ejected from the vehicle during the crash.

If you or a loved one has been seriously injured in an accident involving a passenger van, it is likely in your best interest to consult with a qualified attorney who has experience handling these types of cases. The award-winning team of car accident attorneys at Davis Law Group has helped injured accident victims in Washington state and throughout the country achieve justice for nearly 25 years.

We offer a free case review to anyone who is interested in learning more about their legal rights after an accident. Call our downtown Seattle office at (206) 727-4000 or use the confidential contact form on this page to get started with the claims process.