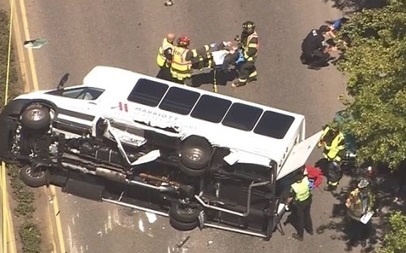 Attorney Chris Davis of Davis Law Group has filed a lawsuit on behalf of a woman that was seriously injured when the Marriott airport shuttle she was riding in was involved in a serious accident.  Jordan v. Fascitelli and Lyft (20-2-15959-0 KNT) was filed on October 29, 2020.  The trial date is set for October 2021.

About the Airport Shuttle Bus Accident

On July 25, 2019, at approximately 1:00 PM, Carmen Jordan (plaintiff) was riding as a passenger in a Marriott airport shuttle bus that was traveling north on International Blvd S. in Seatac, Washington.

At the same time, Gladys Fascitelli (defendant) was driving a 2001 BMW 325i and traveling south in the inside lane of International Blvd South.  Fascitelli was using her cellular telephone while driving.

Simultaneously, Hassen Tubie (defendant) was driving a black Toyota Prius traveling south in the outside curb lane of International Blvd S.  Tubie was working as a Lyft and was transporting a Lyft customer.

Near the 17400 block of International Blvd South., Tubie attempted to merge into Fascitelli’s lane when it was not safe to do so.  However, during Tubie’s attempt to merge into Fascitelli’s lane Fascitelli was distracted because she was using her cellular telephone.  Fascitelli responded to Tubie’s attempted lane change by reacting as if her vehicle was going to be “cut off” by the Tubie vehicle.  Fascitelli then immediately jerked her steering wheel to the far left and caused her vehicle to go across the median that separated the north and southbound lanes of International Blvd S.

Fascitelli’s vehicle then entered the northbound lane of International Blvd S. where it T-boned a Marriot shuttle van broadside as it traveled north.

The force of the impact from Defendant Fascitelli’s vehicle was substantial and it caused the Marriott shuttle van to overturn on its side.

Plaintiff’s lawsuit alleges that Tubie likely had knowledge of a collision and that he may have been a contributing cause. The lawsuit also alleges that despite this knowledge, Tubie left the scene of the collision to avoid responsibility and/or to avoid detection by law enforcement.  Tubie has denied all of these allegations.

Carmen vividly recalls the wreck. She was sitting in the back row of the shuttle van, and was on her way to work at Seatac Airport  She recalls texting with her daughter, and hearing other passengers laughing and joking around behind her. Then, a loud BOOM.  She felt like she flew backward, forward, then backward again. She was wearing a shoulder bag that tangled around a bar and ended up across her neck and she was stuck. An older lady sitting across from her landed on top of her as the shuttle was sliding on its side. The man that had been next to her was gone.  There was a man wearing a white shirt that was covered in blood sitting where the window should have been. There were sirens immediately, and she recalls people coming to help.  Windows were smashed to get in.  The lady on top of her was crying, saying “my leg, my head.”  Carmen said the driver of the shuttle was just hanging there, limp in his seat. She told him to cover his eyes as people were about to break glass to get inside to help.

As a result of the collision, at least 10 people were injured including Carmen C. Jordan (plaintiff) who sustained multiple, serious and life-changing injuries.  Injuries include Concussion, labral tear of right hip (surgery), contusions, bruising, cervical, lumbar and shoulder strain, and PTSD.  Once she was able to get out of the shuttle, Carmen was immediately transported to Highline Medical Center emergency department.  Due to her injuries she missed 6 months of work.