The victim of a multi-vehicle, rear-end accident on Interstate 5 northbound near exit 230 has retained Davis Law Group to represent him in possible legal action related to the crash.

In November 2018, the victim was stopped for rush hour traffic on I-5 when his 2018 Ford F-150 truck was struck from behind by a 2007 VW Rabbit that had been hit by a 2014 Mercedes Benz that failed to stop for slowing traffic. See photos below.

The chain-reaction accident was captured on video by the Ford truck’s rear-facing dash cam. It is clear that the at-fault driver was traveling at a high rate of speed and did not attempt to slow down before impact. Law enforcement officials suspect that distracted driving may have been a factor in the crash.

The victim suffered back injuries that included bulging disks and herniation that have caused leg and arm problems, as well as severe headaches. 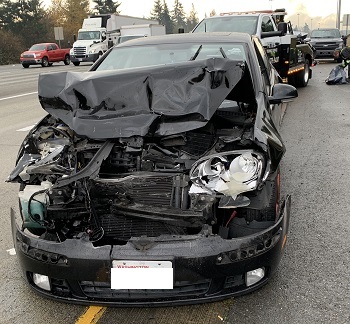 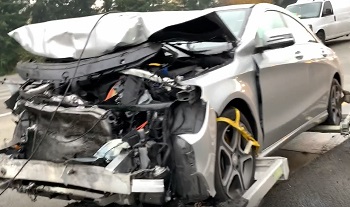 CALL FOR WITNESSES: Investigators working for Davis Law Group are also looking into the circumstances which caused this auto accident. Car accident Attorney Chris Davis is asking that any persons who saw this incident or anyone who has any information about the accident to please call Davis Law Group at (206) 727-4000.