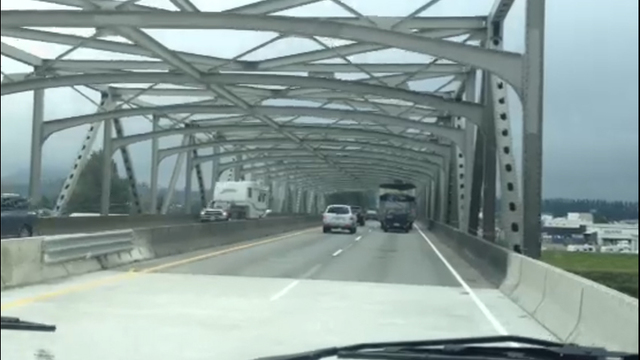 A year ago it was one strike in the wrong place that caused the Skagit River Bridge to collapse into the water.

The bridge is one of 185 spans across the state that is "fracture critical," said Bart Treece, WSDOT spokesperson. 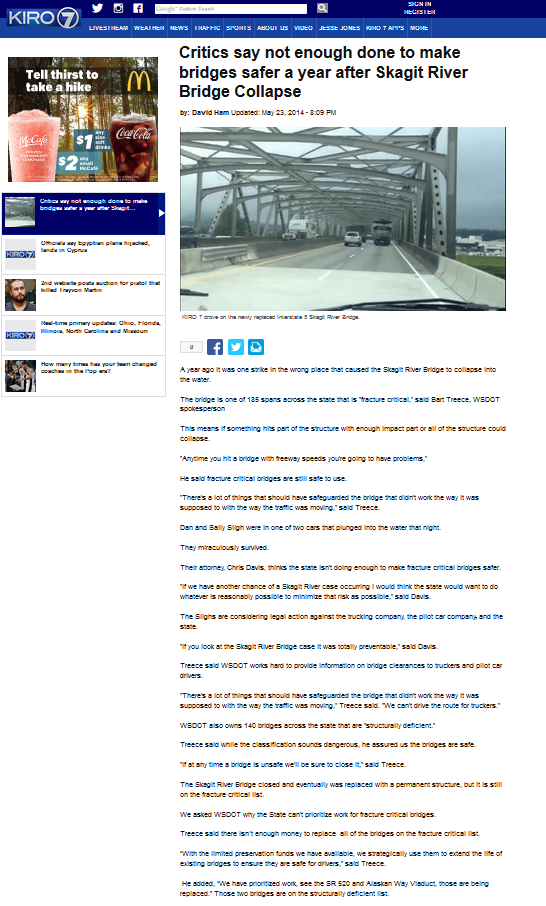 "Anytime you hit a bridge with freeway speeds you're going to have problems," He said fracture critical bridges are still safe to use.

"There's a lot of things that should have safeguarded the bridge that didn't work the way it was supposed to with the way the traffic was moving," said Treece.

Dan and Sally Sligh were in one of two cars that plunged into the water that night. They miraculously survived.

"If we have another chance of a Skagit River case occurring I would think the state would want to do whatever is reasonably possible to minimize that risk as possible," said Davis.

The Slighs are considering legal action against the trucking company, the pilot car company and the state.

"If you look at the Skagit River Bridge case it was totally preventable," said Davis.

"There's a lot of things that should have safeguarded the bridge that didn't work the way it was supposed to with the way the traffic was moving," Treece said. "We can't drive the route for truckers."

WSDOT also owns 140 bridges across the state that are "structurally deficient."

Treece said while the classification sounds dangerous, he assured us the bridges are safe.

"If at any time a bridge is unsafe we'll be sure to close it," said Treece.

The Skagit River Bridge closed and eventually was replaced with a permanent structure, but it is still on the fracture critical list.

We asked WSDOT why the State can't prioritize work for fracture critical bridges.

Treece said there isn’t enough money to replace  all of the bridges on the fracture critical list.

“With the limited preservation funds we have available, we strategically use them to extend the life of existing bridges to ensure they are safe for drivers,” said Treece.

He added, “We have prioritized work, see the SR 520 and Alaskan Way Viaduct, those are being replaced.” Those two bridges are on the structurally deficient list.