01/05/2016 - KING5 television interviewed attorney Chris Davis regarding his representation of a family whose beloved son was murdered by a criminal who was mistakenly released early by the Washington State Department of Corrections (WA DOC) due to a computer glitch.

"The family, in all likelihood, will be bringing a claim against the State of Washington.  Of course, no amount of money can bring back Caesar.  But sometimes it takes the civil justice system hold the government accountable and make sure that something like this never happens again."  -Chris Davis 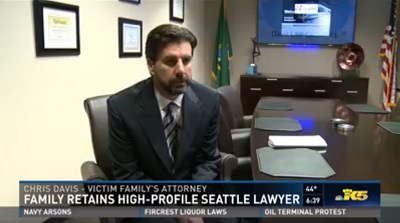