A young woman who was seriously injured in a drunk driving crash has retained the drunk driving accident attorneys at Davis Law Group to represent her in possible legal action related to the Shoreline impaired driving collision.

The crash took place on eastbound State Route 523 near Meridian Street just after midnight in November 2015.  The drunk driver was speeding his Ford pickup truck over 100mph when he slammed into the rear of the victims Ford Explorer and pushed her vehicle 2-3 blocks down the road.

The victim’s vehicle was totaled.  She lost consciousness and was pinned between seat and wheel.  First responders had to free her from the wreckage. The photo below was captured for the responding officer's patrol car dash cam.

The drunk driver, a 33-year-old Issaquah man, was arrest for DUI and blood alcohol tests revealed that he had a .091/.095 BAC at the time of the accident.  Charges were later reduced to reckless driving.  The defendant legally changed his name a year later. 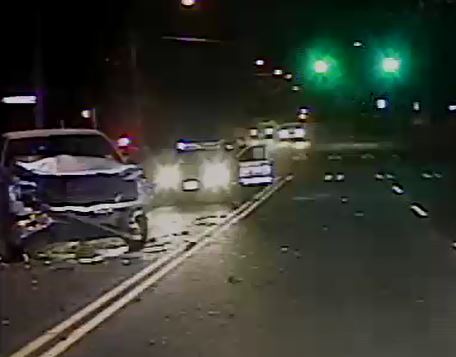