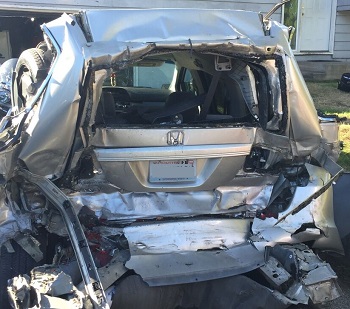 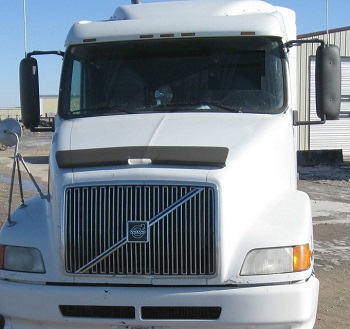 Photos: Crumpled Honda and a semi truck cab of the same make and model of the at-fault driver.  Credit:WSP.

The semi truck accident lawyers at Davis Law Group, P.S. are taking legal action on behalf a young woman who was was rear ended by a semi truck in October of 2016 near Kent, Washington.

On October 7th our client, who was 18 years-old at the time, was a passenger in a vehicle driven by her mother.  They had slowed down for traffic on State Route 167 when they were suddenly and unexpectedly rear-ended by a semi truck.

The truck driver was pulling a fully‑loaded trailer that weighed approximately 90,000 pounds. The driver of the semi‑truck told police that he couldn’t see well due to the dark and rainy conditions on the road. The driver was later cited for “speed too fast for conditions”.

The 2000 Volvo semi truck crushed the 2006 Honda Odyssey SUV like a soda can.  The impact caused both seat backs to break and fully recline.

The victims were transported to a nearby hospital.  Several years later the young woman is still receiving treatment for neck pain, low back pain, chronic knee pain, head pain, anxiety, and PTSD.