A young woman who was the victim of a pedestrian accident caused by a Seattle Seahawks player has retained Davis Law Group to represent her in possible legal action.

On October 17, 2019 at about 6:30pm, the victim was crossing the intersection of NE 4th Street and 108th Ave NE in Bellevue, WA.  She was in a marked crosswalk with the signal in her favor.  Suddenly a 2019 Mazda CX-5 driven by Demetrius Knox made a right turn, failing to yield, and struck the 30-year-old woman, crushing her left foot.

Good Samaritans assisted the victim and noted the license plate number of Knox’s vehicle.  A witness on a bicycle approached Knox, who’s girlfriend was in the passenger seat, to inform him of the accident but Knox did not return to the scene.

The victim was later taken to Overlake Medical Center where she was treated for multiple fractures and displacements.

Returning to the VMAC on a later date, officers were able to interview Knox.  The official police report narrative states:

“Knox stated ‘it was me, I was driving the car.’  I then asked Knox to explain what happened.  Knox reported he had been driving last Thursday to Fogo de Chao, a restaurant in downtown Bellevue.  Knox stated he was unfamiliar with the area, was driving in heavy rain, and had loud music playing on his stereo.  Knox went on to say he made a right turn near NE 4th St and stopped at a red light.  He stated a bicyclist then pulled up next to him at a light and was staring at him.  Knox said he turned his music down and rolled down the window.  The cyclist said to him ‘I think you hit someone back there’.  Knox said he didn’t know what was happening and he said ‘what?’.  The cyclist repeated the same line.  Knox stated all the cyclist said was ‘back there’.  Knox said he turned around in his seat to look and didn’t see anything behind him.  Knox reported the cyclist rode off.  Knox said he got to his destination two blocks away, checked his vehicle, and saw no damage.  Knox stated he thought nothing else of the incident until now.”

“I then explained to Knox he had in fact struck a pedestrian in the intersection and she suffered significant injuries and broken bones.  Knox’s eyes began to tear up and he began shaking his head slowly.  Knox stated multiple times he wanted to make sure the pedestrian was okay and asked for contact information for the pedestrian multiple times.  Knox appeared to be visibly upset, and his voice cracked several times as we spoke about the injuries…”

Although Knox claims that it was dark and raining, traffic cam footage of the accident shows that it was still light outside and there was minimal precipitation.  Data from the national weather service confirms that less than 0.02 inches of light rain fell during the hour of the accident.

The Seattle Seahawks placed guard Demetrius Knox (#63), an undrafted rookie out of Ohio State, on injured reserve on August 20, 2019 after he sustained a quadriceps injury during the fourth quarter of the August 18th preseason game against the Minnesota Vikings.  Sometime after that game Knox underwent surgery.

King County prosecutors determined that criminal charges for hit and run were not appropriate in this case.  However, Knox will face civil responsibility.  It is unknown whether he was impaired by pain medication at the time of the accident or if his right knee injury somehow hindered his ability to safely drive.

The victim, who wishes to maintain her privacy at this time, continues to seek medical treatment for her injuries.

NOTICE TO THE MEDIA:  Requests for information or interviews must be directed to Davis Law Group at 206-727-4000.   Please ask for Ian Waldron.  The victim will not be releasing any statements, nor will she be available for interviews at this time.

Map of the Accident Location 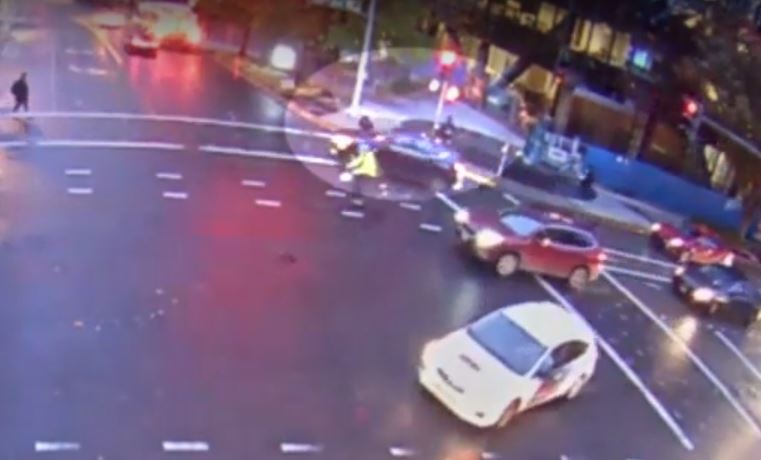