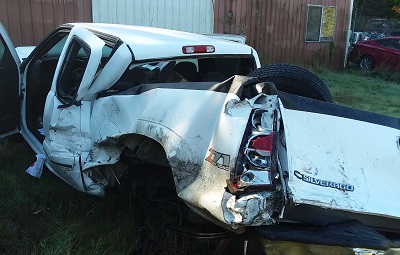 A man who was severely injured in an accident caused by an asleep-at-the-wheel driver has hired  Davis Law Group to represent him  in possible legal action related to the crash which took place in October 2018 near Olympia in WA.

The accident happened on SR 101 near milepost 361.  The victim had stopped and parked his 2005 Chevy Silverado on a highway off-ramp in order to safely enter an address into his truck’s navigation system when he was suddenly rear-ended by a 1999 GMC Sierra traveling approximately 65mph and pushed into the guardrail. His vehicle scraped along 75 feet of guardrail and posts before coming to a stop.

The other driver admitted full responsibility, told police that he fell asleep while driving and received a negligent driving citation.

The victim was transported to a local hospital by first responders. He suffered injures to his back, neck, shoulder, and left arm.   He has been unable to work since the accident.   ​