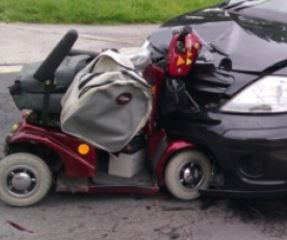 Davis Law Group, an award-winning pedestrian accident law firm, has been retained by a wheelchair-bound homeless man who suffered a broken back when he was hit by a truck while legally crossing the street marked crosswalk.

The accident took place in October 2018 at the intersection of 12th Avenue & Jackson Street in Seattle.  The homeless man was in his scooter crossing the street when he was hit by a 2017 Toyota Tacoma which was owned by Imperial Parking, LLC and driven by one of the company’s employees.  The driver of the truck attempted to brake but did not stop in time.

According to the police report the pedestrian in the motorized wheelchair was crossing with the walk signal in his favor.  The truck was turning right from southbound 12th Avenue South onto westbound South Jackson Street when it struck the scooter.  Another pedestrian that was in the crosswalk at the time witnessed the accident and stated that the scooter was crossing with the signal.  The driver of the truck told police that he simply didn’t see the pedestrian.  Law enforcement officials cited the driver for inattention and no proof of insurance.

The motorized wheelchair pedestrian was transported by ambulance to a local emergency room.  He suffered a broken back and to date has spent almost 2 months at Swedish Hospital.