Click here to go to recent updates and information about the FOOD DRIVE or click here to see photos.  Make an online donation to the Coast Guard by clicking here.

Puget Sound-Area Coast Guard families desperately need our help.  They are not getting paid during the government shutdown and their food bank is empty.

Backstory: How I Found Out the Coast Guard Food Bank is Empty

This morning (January 16, 2019) I while I was getting dressed I saw a news story that mentioned that some military personnel are not getting paid during the government shutdown.

My brother said that he is getting paid and everything is fine for their family. But he mentioned that members of the Coast Guard are not getting paid.

As I drove my son to school I suddenly thought about one of my husband’s former clients who is in the Coast Guard. Everybody in our office loved working with the Detorres family.

When I got to the office I looked up their number and called to see if they were okay.

The client’s wife said that they would be OK for a while but they are going to be spread a little thin if the shutdown goes on for long. They just recently had a baby. Her husband has been stationed abroad but was allowed to come home for the birth. Then she started talking about all of the other Coast Guard families that she knows who really need help now.

She said she is certain that Coast Guard families in the Seattle and Everett area would need food, personal care items, gas cards, etc. She said that a lot of the families they know barely make ends meet in the best of times. She was certain that the lack of a paycheck was going to push them over the edge.

There is a lot of political finger-pointing about who is responsible for the government shutdown. I don’t care to get involved in a political discussion with anyone — my mother told me that it’s best to avoid sex, religion and politics-related topics if you want to keep friends. But I am all about helping the men and women who help protect our country and keep us safe.

So right in that moment this Coast Guard wife and I hatched a plan to make something happen.

She and her husband would contact the Seattle Coast Guard station to find out who we need to work with for on-site logistics: Where can donations be dropped off? Who can collect the donations? Where they would be stored? How they would be distributed? And I would work on a communication to local organizations, charities, people I know in the news media, etc.

Not long after they emailed me with the contact information for the Chief Warrant Officer for the Coast Guard base in Seattle. I called him.

I was shocked by what he told me. 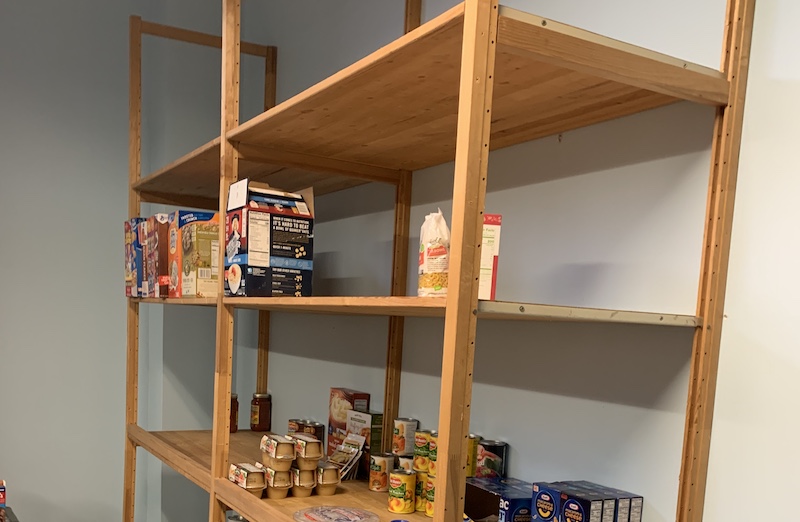 The Chief Warrant Officers Association (CWOA) runs a food bank at the station. Yesterday they thought that they had enough supplies in the food bank to handle the needs of the local community and perhaps even help Coast Guard families elsewhere in the region.

But today they ran out of food. THE FOOD BANK IS EMPTY!

Mind you, I spoke to him at about 2:30 p.m. and the food bank had been cleaned out for several hours.

He also told me that more than 1,300 people are posted on the base. And that roughly 70 percent have families.

I nearly lost my mind.

So, I picked up my son from school. I started typing up a list of things that Darren told me they needed.

I was going to contact the webmaster for the Coast Guard base and CWOA’s websites so they could post something about the food drive — but then I saw, in big letters with a red background, the words, “Based on lapse in federal funding…this website will not be actively managed.”

Ugh! Now I am going to have to build a webpage too. Luckily, I know something about how to do that and I manage a website. 😊

Below is information on how YOU can help. I am about to head to the grocery story to fill up my SUV. I'll be driving to the food bank tomorrow morning. I should be there no later than 10 a.m. Who is with me? 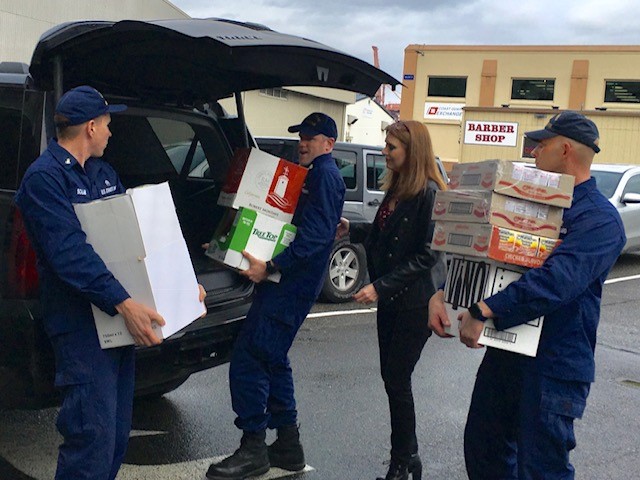 01/17/19 - Not long after I wrote this story I hopped in my SUV and headed to the Grocery Outlet store where I only had to spend $116 to fill the cargo area of my vehicle.

The following morning (January 17, 2019) I headed to the Coast Guard station to make my donation.

On my way, the food bank administrator called me and said that if I could be there by 10 a.m. he would like me to attend the station chief's meeting as his guest.

When I arrived I saw the near-empty food pantry and a few dozen Coast Guard personnel in uniform. The boxes were unloaded from my SUV.

The meeting started and I listened to them discuss the scope of the problems and the hundreds of families that are impacted. I was one of only 3 or 4 civilians there. Nearly everyone in the room was working without pay. Working to keep our coastline safe.

Someone told the story of how a Coast Guard wife had driven an hour and a half to come to the food bank just a few days before.

The food bank was scheduled to open at 11 a.m. As the meeting continued I could start to hear the sounds of people lining up waiting for the food bank to open.

I couldn't just drop off my donation and then drive away. I just couldn't.

After the meeting I got in a huddle with a few guys in uniform and a couple of the civilians. We decided that a major food drive was needed.

01/19/19 - Elisa Jaffe from KOMO personally made a donation and got the entire station focused on the problem.  She just texted me to say that KOMO Problem Solvers is making a $5,000 donation and will setup another $5,000 in donation matches.  WOW!

I started calling my contacts at the USO, at local TV and radio stations; local businesses, etc. I even called former Seahawk Marcus Trufant who I had met at a holiday party just a month before.  Things are happening fast. The food drive is scheduled (January 26, 2019) .

FOOD DRIVE - On Saturday, January 26, bring your donation to Fred Meyer stores in Ballard or Issaquah between 10 a.m. and 3 p.m. Marcus Trufant, former Seattle Seahawk, will be signing autographs and taking photos with donors at the Fred Meyer in Ballard (915 NW 45th St, Seattle).

1/25/19 - We've been scrambling and scrambling to find someone who has big trucks that is willing to donate the trucks, drivers and time to transport donations from our food drive sites to the Coast Guard station on Saturday.  Albert Lee appliance has generously donated the trucks!!!  Yea!

There are two ways for you to quickly get involved. One is to make a donation to the CWOA's food bank supporting Coast Guard families and the other is to make an online donation via the Northwest USO.

Please, no frozen or refrigerated foods.

The Coast Guard and the Chief Warrant Officers Association (CWOA) do not have any system for collecting online donations and are not permitted to setup GoFundMe pages. However, USO Northwest does have a secure donation page on their website and visitors can indicate that they specifically want their donation earmarked for the Coast Guard. And the USO has a dollar-for-dollar donation matching program too — so your donation just got doubled!