A 37-year-old woman who was seriously injured while riding on the back of her boyfriend’s motorcycle has retained Seattle motorcycle accident attorney Chris Davis to represent her in possible legal action.

In June of 2018 the woman and her boyfriend riding a 2008 Harley Davidson Street Glide eastbound on West Garfield (Magnolia Bridge) as a Subaru Forester entering the on ramp from 23rd. Suddenly the car made an illegal u turn. The motorcycle driver had no time to react.  He applied both his front and rear brakes and tried to swerve to avoid a collision.  But the motorcycle crashed into the rear of the car which threw both he and his passenger into the air propelling them 15 to 20 feet from the point of impact.

The female motorcycle passenger suffered 5 broken ribs, a punctured lung, a brain injury and numerous lacerations. She was transported by ambulance to Harborview Medical Center. 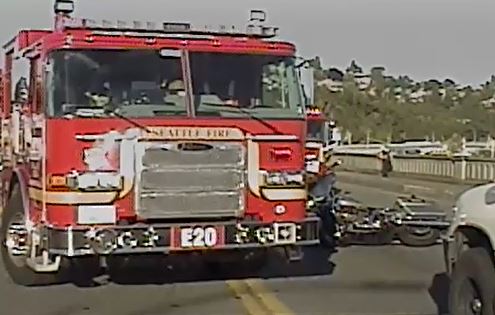