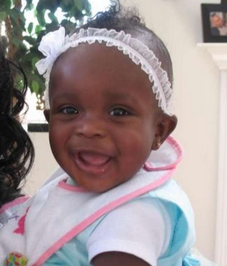 The mother of a 2-year-old girl killed in a fall from the third story of a subsidized apartment has sued the Seattle Housing Authority and the building’s owner, claiming safety failures caused her daughter’s death.

Sarah Cochran and her mother came to the apartment building, owned by Abused Deaf Women’s Advocacy Services, in the summer of 2014, looking for a safe place to live. What they got, the family’s attorneys say, was an unsafe apartment they weren’t allowed to fix.

Writing in the wrongful-death lawsuit, attorney Christopher Davis aid the furnished apartments were supposed to meet standards set by Seattle Housing Authority and federal regulators. They didn’t, the attorneys said, and those failures caused Sarah’s death in August 2014.

“They could’ve easily childproofed those windows,” Davis said Tuesday. That fix, he said, would’ve cost about $15 a window.

“The landlord has to consider the risks that may be unique to certain types of tenants who are occupying the premise,” the Seattle attorney continued. “If you’ve got a tenancy that’s only available to women with small children, more should be done to childproof the apartments.”

Like Sarah’s mother, Theresa Cochran, all the residents of the 19-unit building were women with severe hearing difficulties who had faced domestic violence. All residents either had children or were pregnant when they moved in.

The Cochrans relied on a rent subsidy provided through the Seattle Housing Authority. The organization manages housing for 28,000 low-income people in Seattle, most of whom are elderly, disabled or children.

Writing the court, the family’s attorneys said Cochran and others living in the Maple Leaf neighborhood building complained about the danger posed by the windows prior to Sarah’s fall. Tenants weren’t allowed to move the furniture in the units, the attorneys said in the lawsuit, leaving them with little they could do to protect their children.

Seattle’s high temperature was in the low 80s on Aug. 12, 2014, hot enough for an open window in the Cochrans’ third-floor apartment. A large, screened window stood open next to a bed in Sarah’s room.

The girl and her mother sat on that bed watching television when Theresa stepped out for a moment. When she returned, her daughter and the window screen were gone.

Sarah, having fallen to the sidewalk below, was rushed to Harborview Medical Center. She was pronounced dead at the hospital.

Seattle Housing Authority and the building’s owner, the family’s attorneys said in the lawsuit, failed to take “reasonable precautions to minimize or eliminate the risk of children falling” from the building.

Thousands of children are hurt or killed each year in falls from windows. Davis said Cochran hopes to raise awareness of that danger while pushing Seattle Housing Authority and its partner to better protect children.

Due to the design of the unit, Cochran couldn't have moved the bed away from the window even if she was allowed to do so, Davis said. But, the attorney continued, the window could have been made safe.

Filing the lawsuit earlier in April, Davis contended Abused Deaf Women’s Advocacy Services and Seattle Housing Authority were both negligent. The non-profit organizations, the attorneys said, are jointly liable for the harm to Sarah and her mother.

The lawsuit is currently pending in King County Superior Court.