Davis Law Group, P.S. has filed a lawsuit in Snohomish County Superior Court on behalf of an off-duty officer who was badly injured in a drunk driving accident with a person driving a rental car near Lake Stevens, WA.

In December 2015, an off-duty Snohomish County Sheriffs’ Department police officer was westbound on SR 204 in Snohomish County in his 2002 Chevy Trailblazer.  At the same time, a Missouri couple visiting the Seattle to attend an Ultimate Fighting Competition were driving an Alamo Rental Chevrolet Malibu traveling eastbound on SR 204.  The off-duty officer was approaching the intersection of SR 204 and Sunny Side Boulevard when the rental car, which had been erratically veering across lanes of traffic, suddenly attempted to make a left-hand turn at the same intersection.

The rental car struck the Trailblazer vehicle nearly head on.  The victim had to exit the vehicle through window because the vehicle doors were too damaged to open.  He was placed on a backboard and stabilized with a neck brace for transportation to the emergency room.  He required 14-staples to close the wound on his head.  He sustained serious bodily injuries and other damages as a result of the collision including a mild traumatic brain injury and leg injuries.

The driver of the rental car, JOY L. MURPHY of Kansas City, Missouri was cited for “Failure to yield right-of-way” and “Driving under the Influence”. 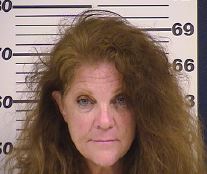 Just a few months earlier, July 2015, Murphy had been arrested in Platte County Missouri for physically assaulting an officer and a DWI checkpoint.  Murphy had been a passenger in a vehicle in which the driver was being questioned for suspected impaired driving.

According to a story which appeared in The Platte County Citizen, Murphy told the deputy, “This whole (expletive) thing is (expletive).”  The deputy walked away from the scene, only to have Murphy say, “I hope you get caught drinking and driving and your own department catches you and kicks your teeth out.”  The deputy then observed Murphy slapping a bystander in the face.  Due to the physical assault, the deputy returned to Murphy and attempted to put her hands behind her back to detain her. However, she pulled away and then slapped the deputy in the face with both hands, according to a probable cause statement.