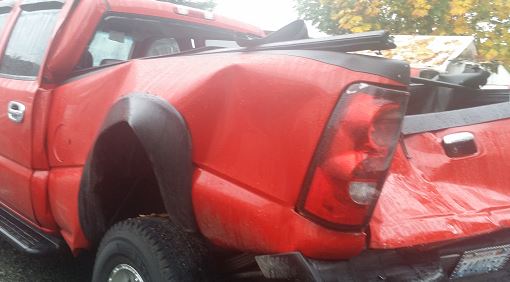 Davis Law Group, P.S. has filed a civil lawsuit on behalf of the victims of a drunk driving crash / commercial vehicle accident that took place near Sumner in WA.

According to the complaint for damages (Pierce County Superior Court 18 2 10983 9), on an October night in 2015, at approximately 6:18 PM, Todd Zumach was operating a Caliber Concrete Construction pick-up truck in the eastbound lanes of State Route 162 in Pierce County, Washington.

The victims were operating a 2004 Chevrolet 3/4 crew cab pickup truck that was also heading east on SR 162 traveling in front of the Caliber Concrete vehicle.  When the victims stopped for slowing traffic suddenly and without warning, Zumach collided with the rear of their vehicle (at approximately 50mph), then veered into the westbound lanes of SR 162, where he struck another vehicle.

Law enforcement officials investigating the crash determined that Zumach was impaired by alcohol consumption.  Officer’s report states, “As I spoke to Zumach, I smelled the strong odor of intoxicants coming from him…eyes were bloodshot and watery…I observed a can of Rainier beenr in the back seat of Zumach’s vehicle…he had been drinking at the Puyallup Fairgrounds in the beer garden.”

Two breath-alcohol concentration (BAC) tests were administered to him within two hours of the crash.   His blood alcohol readings were 0.109 g/100ml and 0.106g/100ml, each reading over the per se legal BAC limit of 0.08 g/100ml.  Law enforcement arrested Zumach for violations of RCW 46.61.502 (driving under the influence).

The driver and passenger in the victim-vehicle sustained bodily injuries and other damages as a result of the collision including injuries to the lumbar spine; neck; and leg as well as a mild traumatic brain injury.

The lawsuit goes on to claim that Caliber Concrete failed to properly train and supervise Zumach regarding the safe operation of the company’s vehicles while conducting business.