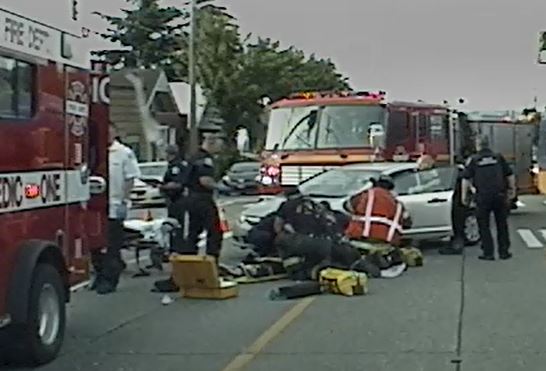 Davis Law Group, P.S. has filed a civil lawsuit in King County Superior Court (18 2 25208 3 SEA) on behalf of a pedestrian accident victim who was struck in a Seattle-area crosswalk in June 2018 by an attorney for the Skagit County Public Defender’s office who had no automobile insurance at the time of the accident.
Photo #1:  First responders provide medical assistance to pedestrian accident victim.  Source: Seattle Police Department dashcam
At about 7am on a June morning in 2018 the victim was in Seattle's Ballard neighborhood legally crossing the intersection of NW 70th Street and 15th Ave NW with the crossing signal in her favor when she was struck by a 2009 Honda Civic driven by the defendant, Devin R. Hennessey.
A good Samaritan that witnessed the accident and called 911 described the vitim as, “…screaming and grabbing her head, it looks like there is quite a bit of blood…”
The victim, who works as a financial analyst at Amazon, was transported to Harborview Medical Center where doctors determined that she suffered serious injuries including fractures to her leg and pelvis needing multiple surgeries requiring plates and six screws.  Weeks later after being discharged from Harborview she was transferred to a skilled nursing facility and was confined to a wheelchair for months before starting physical therapy to regain function and mobility.

At-Fault Driver Is An Attorney

Devin Reilly Hennessey is an attorney licensed in the State of Missouri (Bar Number: 68131, Admitted: 9/16/2015) and the State of Washington (Bar Number: 53095, Admitted: 12/21/2017) working as a public defender in Skagit County since earlier this year.  He has been a resident of Washington State since August of 2017.  He is a 2015 graduate of Florida Coastal School of Law.
According to the police report, Hennessey “made a left turn onto N/B 15 Ave NW, but failed to yield the right-of-way to a pedestrian, who was walking W/B from the N/E corner to the N/W corner, in a marked crosswalk, with the pedestrian signal.” 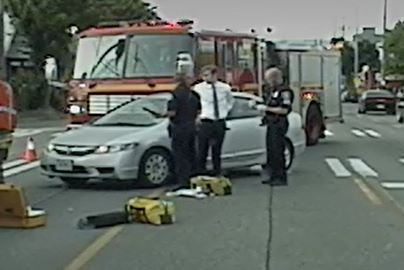 The report goes on to say that the at-fault driver, “…provided an expired vehicle registration and an expired insurance card.”  At the time of the accident Hennesseey was driving a vehicle with Missouri license plates and was operating the vehicle with a Missouri driver’s license.
Seattle Police Department dashcam video and body cam audio from the pedestrian accident scene show that Hennessey immediately called his mother after the accident--while first responders where trying to stabilize the accident victim.
The defendant’s mother is believed to be Cynthia M. Hennessey of Hennessey Law Firm in St. Louis, MO.  She is a registered nurse as well as a personal injury attorney.  According to her website, “ After becoming an Attorney, she spent her first seven years…representing Insurance Companies and Employers in Workers' Compensation matters.”  The website goes on to describe her as “…a strong advocate for preserving the rights of the injured…”
Photo #2:  Law enforcement officials question the at-fault driver.  Source: Seattle Police Department dashcam

In Washington State attorneys take the ‘Oath of Attorney’ when admitted into the bar association.  The first part of this oath includes…“I am fully subject to the laws of the State of Washington and the laws of the United States and will abide by the same.”
The defendant, Attorney Devin Reilly Hennessey, has failed to live up to this oath by not obtaining a Washington drivers’ license; not registering his vehicle in Washington; and not having motor vehicle insurance at the time of the accident. 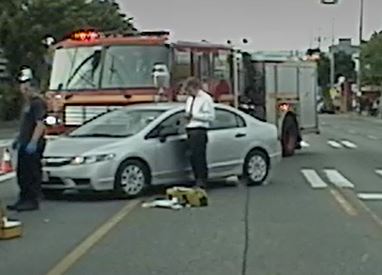 Photo #3:  At-fault driver calls his mother for legal advise.  Source: Seattle Police Department dashcam
As an attorney licensed in two states and the son of an experienced personal injury attorney one would expect the defendant to fully understand and comply with the duties and legal responsibilities involved with operating a motor vehicle in Washington State.

The lawsuit claims that the Defendant’s negligent and reckless conduct injured the plaintiff who suffered, and continues to suffer, physical disability and pain, emotional trauma, medical expenses, loss of earnings and earning capacity, loss of consortium and other damages as a result of the accident.  The defendant is responsible for compensating the Plaintiff for all damages including past and future medical expenses and other health care expenses, pain and suffering, both mental and physical, past and future permanent partial disability and disfigurement, loss of enjoyment of life, damages to property, past and future special damages, loss of consortium and other damages.

RCW 46.30.020
(1)(a) No person may operate a motor vehicle subject to registration under chapter 46.16A RCW in this state unless the person is insured under a motor vehicle liability policy with liability limits of at least the amounts provided in RCW 46.29.090, is self-insured as provided in RCW 46.29.630, is covered by a certificate of deposit in conformance with RCW 46.29.550, or is covered by a liability bond of at least the amounts provided in RCW46.29.090. Proof of financial responsibility for motor vehicle operation must be provided on the request of a law enforcement officer in the format specified under RCW 46.30.030.
In Washington State, your car insurance policy must provide:

According to the Washington State Department of Licensing, “new Washington residents with a valid license from another state must get a Washington license within 30 days after moving to the state.” And “new residents have 30 days to register and title their vehicle when they move to Washington.”  Source:  https://www.dol.wa.gov/driverslicense/moving.html