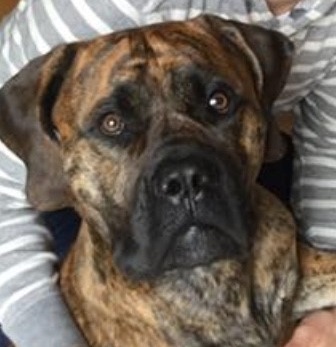 Davis Law Group has filed a dog bite lawsuit on behalf of a 58-year-old Victoria, BC woman who was viciously attacked by a Mastiff dog while making a social call to a Kent, WA area home on November 18, 2016.

The victim had just arrived at the home and was exiting her vehicle when the 3-year-old, un-neutered male, brindle Mastiff named Henrik approached her. The dog was not restrained in any way---no tether or chain.  Suddenly and without warning the dog lunged at and viciously bit the woman on the back of her arm.  The dog then pulled her to the ground and proceeded to drag her to the end of the driveway. It took two people to fight the dog off as it mauled her.

The victim was immediately treated at Valley Medical Center for deep lacerations to her left arm which required more than 20 sutures.   She has required additional rehabilitative treatment for movement issues, serious scarring and suffers from PTSD.

The attack on the victim was totally unprovoked.  She did not tease, hit, or startle the dog.  Nor did she shout at the dog, invade its space or threaten the dog or its owners in any way.

The dog was impounded the following day.  Due to the dog’s history it was euthanized a few days later.

Dog owners have the responsibility of knowing the personality of their pets, as well as training them to behave in public or around guests.  As the owners, keepers and/or harborers of the dog, Defendant dog owners are strictly liable for the injuries and damages caused to Plaintiffs as mandated by the dog liability statute at RCW 16.08 et seq.

According to the complaint for damages, the dog owners had prior knowledge that their dog had vicious and/or dangerous propensities and that their dog had previously bitten, injured and/or acted aggressively toward other human beings and animals.  The dog had been investigated for another bite incident just a few months before in March of 2019.