Davis Law Group, P.S., has filed a civil lawsuit on behalf of a passenger injured in a multi-vehicle accident caused by a senior citizen driver in Bellevue, WA. 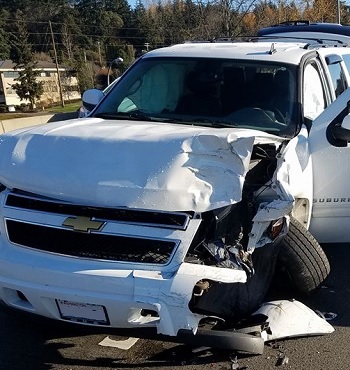 In December 2016 the car accident victim was a passenger in a 2012 Mercedes C300, which was being driven by a friend.  They were traveling westbound on Highway 520 just east of Interstate 405 in Bellevue, WA.  They were in lane 2 of 4 and were stopped in traffic.  A 76-year-old, senior citizen was driving a 2013 Chevrolet Suburban, also heading westbound on Highway 520 in lane 1 of 4.

The elderly driver inattentive and attempted to change lanes from lane 1 to lane 2, and struck the right rear panel and wheel of the Mercedes extremely forcefully, at an impact speed of approximately 60 mph.  His vehicle impacted the entire right panels of the Mercedes three times.  He then lost control of his vehicle and proceeded to collide with a second and third vehicle, before bringing his vehicle to a stop along the highway.

The victim sustained immediate injuries in this collision.  The Bellevue Fire Department arrived, and after giving her care at the scene she was restrained in a C-collar and back board and was transported to Overlake Hospital ER.  She was very shaken and in shock, and experiencing severe back, head and neck pain.

This collision disrupted and changed the accident victim’s life.  She had never had neck, shoulder or back problems, or jaw pain prior to this collision, and she had not suffered migraine headaches.  She required months of medical treatment and incurred tens of thousands of dollars in medical bills.