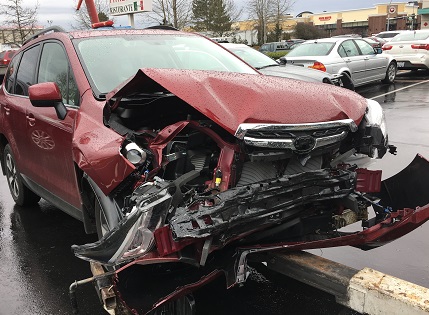 Davis Law Group, P.S. has filed an insurance coverage dispute lawsuit in King County Superior Court (19 2 03140 9 SEA) against the at-fault driver and Vigilant / Chubb Insurance on behalf of the victims of a Tukwila, WA accident that took place in January 2017.  Read the court filing.

On January, 29, 2017 at approximately 1:25 PM the driver of a 2006 Honda made an unsafe left-hand turn across southbound Southcenter Parkway directly in front of a 2017 Subaru Forester that was lawfully traveling in the curbside lane heading south.  The two vehicles collided and crashed into a 2013 Mazda.

The crash caused serious damage to the Subaru Forester and lasting injuries to the accident victim inside.  She suffered injuries to her sternum, right knee, lateral epicondylitis, and both shoulders which later required surgery.  In addition to the surgery, she needed months of physical therapy.  Within a very short time she had already accumulated tens of thousands of dollars in medical bills.

Under the terms of the policy (which is a contract), the policy-holder victim is entitled to recover automobile insurance policy benefits, including UIM benefits and excess UIM benefits, from Vigilant / Chubb for the damages sustained in the collision on January 29, 2017.  The victim’s damages (property damage, health care expenses, pain and suffering, partial disability and disfigurement, loss of enjoyment of life, special damages, loss of consortium, lost wages, etc.) exceed the amount of at-fault driver’s auto insurance limits---in other words the at-fault driver didn’t have enough insurance to pay for the victim’s damages.

In January 2016 ACE Limited completed its acquisition of Chubb Group. ACE adopted the Chubb brand name and now trades on the NYSE under the ticker “CB.” Chubb is the largest publicly traded property and casualty insurance company and is and the largest commercial insurer in the U.S.