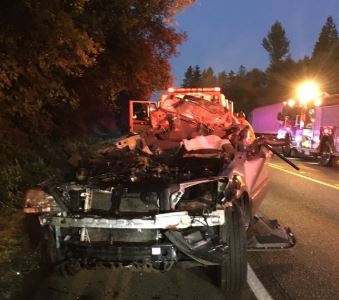 Seattle, WA - The parents of the only survivor of the Lynnwood semi-truck accident that killed three teens on July 26, 2017 have retained attorney Chris Davis of Seattle-based Davis Law Group to represent their beloved daughter who was seriously injured in the crash.

Three Jackson High School (Mill Creek) students were killed in the early morning hours of July 26, 2017, when a Kia Sorrento SUV struck an illegally-parked semi-truck in on Alderwood Mall Parkway in Lynnwood.  The force of the crash was so powerful it tore off the top of the SUV.

Accidents that involve a crash with a semi-tractor trailer which results in the top of the vehicle being sheared off is commonly referred to as an underride accident.  Very often the occupants are fatally injured, often decapitated.

There were four friends in the vehicle that night.  Two of the teens were pronounced dead at the scene. One died in the ambulance on the hospital.  The Snohomish County Medical Examiner’s Office identified the teens as Landon Staley, 16; Travin Nelson Phongphiou, 16; and Mikayla Sorenson, 15.

A 15-year-old Cascade High School student was the sole survivor of the crash is still being treated in the pediatric intensive care unit at Harborview Medical Center in Seattle with undisclosed injuries. She has suffered numerous injuries and required emergency surgery on Thursday.  Her family has retained attorney Chris Davis to ensure that her legal interests are protected.

According Snohomish County law enforcement officials the semi-trailer involved in a deadly crash was illegally parked.  Officials say that it is legal for trucks to park trailers in the designated parking areas along Alderwood Mall Parkway. However, the trailer involved in the crash was parked on the wrong side of the road and pointed in the wrong direction---against traffic. The front of the trailer was facing oncoming traffic which is a violation of parking regulations.

NOTICE TO THE MEDIA:  The family of the crash survivor would like to maintain their privacy during this difficult time so they can focus all of their energy and attention to supporting their daughter during her hospitalization and initial recovery.  Please direct any and all requests for information or news media interviews must be directed Davis Law Group.