Seattle, WA, March 25, 2019 - Davis Law Group, P.S. has filed a civil lawsuit in King County Superior Court (19-2-07812-0-SEA) on behalf of a man who was injured when a construction elevator at the property known as the F5 Tower suddenly dropped multiple floors. 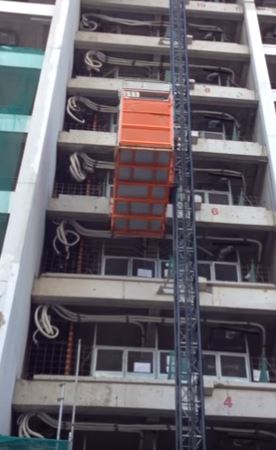 On the blustery morning of September 17, 2016 gusting winds reached 40 mph at times.  At around 12:30 pm three workers were in an external temporary elevator erected on a crane which is commonly referred as a construction “hoist” or “manlift.”  The manlift was somewhere between the 33rd and 37th floors when high winds caused a power cord to slip and catch on a fall protection net outrigger.  Suddenly and without warning the manlift fell multiple floors before coming to an abrupt and hard stop.  One of the construction workers sustained bodily injuries as a result of the sudden fall.

According to the complaint for damages, defendants negligently failed to properly hire, train, and/or supervise their employees with due care and good judgment.  These duties include, but are not limited to, shutting down the manlift when adverse weather conditions make operation hazardous and/or to shut down the manlift when wind speeds reach greater than 35 miles per hour.

Defendants owed duties to all workers at the construction project to comply with all applicable safety regulations, practices and procedures under the Washington Industrial Safety and Health Act, Chapter 49 of the RCW; WAC 296-155-77105; WAC 296-155-040 and ANSI A10.4-2016 30.

Fifth & Columbia Investors, LLC was the owner and lessor of the property at the time of the accident.