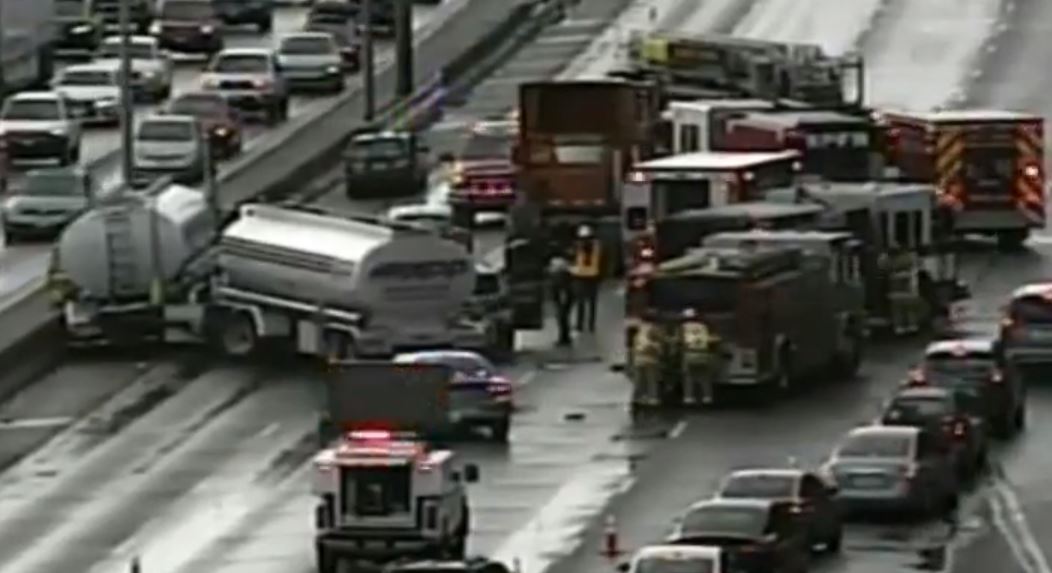 A couple that was injured on Easter Sunday, April 1, 2018, when their vehicle was rear-ended by a semi truck have retained Davis Law Group, to represent them in possible legal action against the trucking company, YRC Freight and the owner of the truck Associated Petroleum Products Inc.

The couple were traveling on southbound I-5 near Gravelly Lake Bouvard nearke Lakewood at approximately 3pm on Easter Sunday when heavy traffic came to a stop.  But the gasoline tanker semi truck did not stop and rear-ended their Honda at approximately 70mph.  Their vehicle was sent spinning through multiple lanes of traffic.  At least 10 vehicles were involved in the crash.

The driver of the Honda had to be cut out of the vehicle by first responders.

The couple suffered multiple injuries and are still under medical care.

The WSP report image below shows two frames of an artist's drawing of the collision and final position of the vehicles involved.

CALL FOR WITNESSES:  Investigators working for Davis Law Group are also looking into the circumstances which caused this collision. Truck accident attorney Chris Davis is asking that any persons who saw this incident; who may have come upon the scene after the crash; took photos/video; anyone who may have tried to offer assistance on the scene or who had any contact with any of the victims; or anyone who has any information about the accident to please call Davis Law Group at 206-727-4000.