The Washington Traffic Safety Commission (WTSC) has announced that law enforcement officials arrested a total of 1,603 impaired drivers throughout the State of Washington during the 2012 “Drive Hammered, Get Nailed” campaign, which ran from Aug. 17 to Sept. 3.

In King County alone, officers arrested 364 total drivers for investigation of DUI this year. Though that number is down from the 452 arrests in 2011, Seattle drunk driving accident lawyer Chris Davis says the arrests potentially saved hundreds, if not thousands, of innocent lives.

“Anytime you have a three week period where thousands of impaired drivers are taken off the road and held accountable for their actions, it has to be viewed as a success,” says Davis, who has represented hundreds of DUI collision victims in his nearly 20-year career. “And while we will never know exactly how many tragic accidents could have resulted, the key is that they never happened.”

According to the WTSC, more impaired driving fatalities in Washington State occur during August than any other month of the year. In response to that trend, the WTSC’s “Drive Hammered, Get Nailed” campaign runs through during a two-and-a-half week period at the end of August through September.

Thanks to a grant from the WTSC, law enforcement agencies statewide were able to pay staff for additional DUI patrols throughout the area.

“The additional patrols are clearly effective in catching impaired drivers long before they have the opportunity to cause a deadly collision,” Davis added. “In a time where state budgets are thin, it is reassuring to see that getting impaired drivers off the road is still a top priority for law enforcement.” 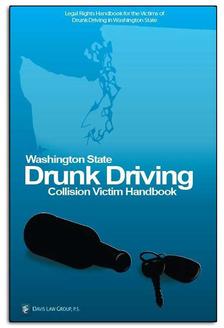 Davis, who serves as the principal attorney and founder of the Davis Law Group, has also authored a legal guide on drunk driving collisions titled the “Washington State Drunk Driving Collision Victim Handbook.” The guide explains the basics of pursuing a personal injury claim against a drunk driver and the various state laws that factor into an impaired driving case.

The book is part of the Washington Accident Books series, which features a number of additional guides that Davis has authored. Anyone interested in ordering a complimentary copy should visit http://www.WashingtonAccidentBooks.com.

Christopher M. Davis, founder of the Davis Law Group, has been a licensed attorney in the state of Washington since 1993. He has tried dozens of personal injury cases to verdict and has successfully handled and resolved hundreds of accident claims. He has been a Washington Super Lawyer' for seven years in a row for his expertise and success in litigating personal injury claims.