The top-rated dog bite lawyers at Davis Law Group represent the victim of a vicious dog bite that took place on June 29, 2018 at approximately 3:30pm at the Gorge Amphitheater camping area in George, Washington on the day of the Dead & Company Concert and is seeking possible witnesses. 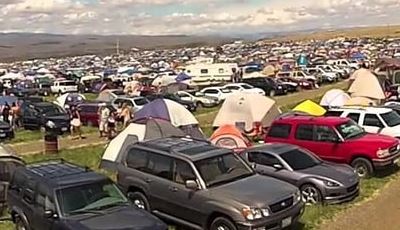 The victim was walking through the camping area when a woman approached him and asked for help for a nearby man that seemed passed out in the grass from apparent drug or alcohol use.  Having had past medical/EMT training he walked toward the man who was passed to see if he needed medical assistance.  When he was about 6 to 8 feet away from the man, suddenly a nearby lab-shepard mix dog jumped out and bit him on the hand.

The dog owner brought his animal to the concert venue’s camping area despite well publicized Live Nation rules and policies against pets at The Gorge.

Can I bring my dog?

No. Do not bring any pet whatsoever, not because we don't like them - we are all animal lovers here - but it is cruel and unfair to the pet to leave it alone in the campground or parking lot, locked up or in a car or tent where it may suffer from extreme heat. When we see a pet in a car or running around the camp ground unattended, we will alert the authorities and your vehicle may be entered and the pet taken to a shelter for its own welfare. You may be subject to prosecution for cruelty to animals.

CALL FOR WITNESSES:  Investigators working for Davis Law Group are also looking into the circumstances which lead up to this animal attack.  DLG is asking that any persons who saw this incident; who may have come upon the scene after the attack; took photos/video; anyone who may have tried to offer assistance on the scene or who had any contact with the victim; or anyone who has any information to please call Davis Law Group at 206-727-4000.