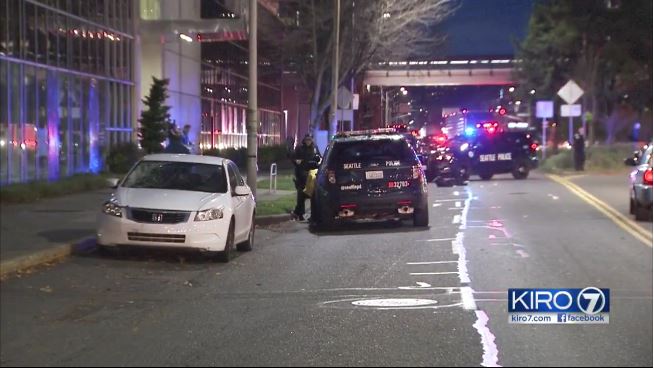 On November 18, 2016 a woman was crossing the double crosswalk at the intersection of Western Ave and Elliott Ave. when she was struck by a vehicle and thrown 80 feet after striking the windshield of the car.

She crossed the first cross walk with no problem.  After seeing the WALK signal she started to make her way across the second section when she was hit by a vehicle and was thrown 80 feet into the air.

The woman suffered broken ribs, broken legs, and other serious injuries in the pedestrian accident.  She was transported to Harborview Medical Center where she underwent multiple surgeries and spent several days in ICU before spending more than a month in the hospital and later transferred to a rehabilitation facility.

One Of Seattle's Most Dangerous Crosswalks: Elliott & Western

Media reports described the intersection as “notoriously dangerous, low-visibility crosswalk” and stated that numerous complaints about the area have been filed with the city.  The story includes statements from several people who work in the area and say that they are afraid of the intersection.  The report states that another pedestrian had been hit in the same spot just a few months before.

KIRO TV checked with the Seattle Department of Transportation to find out if there are any plans to improve safety at the intersection but did not get a response.  . The police may have obtained surveillance video from nearby business that showed the incident.

CALL FOR WITNESSES:  Investigators working for Davis Law Group are also looking into the circumstances which caused this collision.  Attorney Chris Davis is asking that any persons who saw this incident; who may have come upon the scene after the crash; took photos/video; anyone who may have tried to offer assistance on the scene or who had any contact with the victim; or anyone who has any information about the accident to please call Davis Law Group at 206-727-4000.