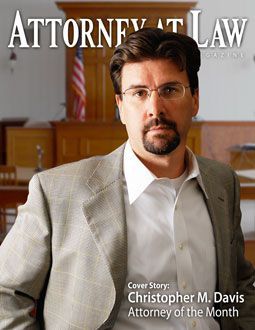 Davis Law Group, P.S. is pleased to announce that Attorney at Law Magazine has honored the firm’s founder Christopher M. Davis by naming him ‘Attorney of the Month,’ dedicating a 6-page spread to Davis and his firm, and featuring him on the cover of the inaugural issue of the publication’s National Edition.

Attorney at Law Magazine is a highly regarded, national trade publication for and about the business of law, featuring industry news, educational articles, and client case studies, as well as profiles on law firms and private practice attorneys.  In addition to the National edition the magazine has a number of city and region specific editions designed to give relevant news and deep perspective to the local legal community.

“For our inaugural National Edition cover story, we can’t think of anyone we’d rather feature than Chris Davis, of the Seattle-based, Davis Law Group”, said Ken Minniti, president, CEO and publisher in the publications ‘From the Publisher’ letter.  “If his name sounds familiar, it is no surprise…Davis regularly appears as a legal expert on a flurry of local and national media including CNN, Seattle Times, and MarketWatch, to name just a few. He’s also been named one of Washington State’s Top 100 Trial Lawyers, a Super Lawyer, Rising Star, as well as being listed in Who’s Who in Personal Injury Law.”

“I have always been a strong proponent of victims’ rights and I am naturally drawn to the cause of underdog.  Injured people often find themselves out-gunned by insurance companies, corporations or governmental entities and end up having to fight for their legal rights and fair compensation for their injuries,” said Davis.  “As a personal injury attorney I can help to level the playing field by providing victims with quality legal representation.”

Davis has been the recipient of numerous awards and industry accolades including being named ‘Super Lawyer’ for six consecutive years; receiving a 10.0 Superb rating from attorney rating site Avvo; being recognized as one of the ‘Top 100 Trial Lawyers in Washington State’ by the American Association for Justice; and being awarded ‘Washington Personal Injury Attorney of the Year in 2011 by the American Lawyer Academy.

He has also been interviewed by numerous local and national news outlets such as Huffington Post, CNN, NBC, ABC, CBS and FOX to offer his client’s stories, commentary and opinion on legal issues.

The six-page spread on Davis and his firm appears in the July issue of Attorney at Law Magazine featuring Davis on the cover.

Click here to see the pdf version of the Attorney at Law Magazine story.