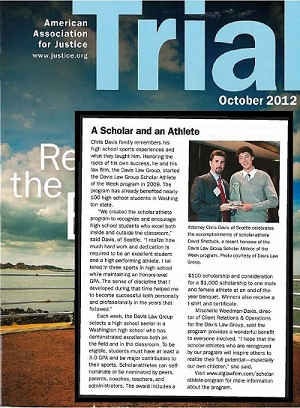 The Davis Law Group Scholar Athlete Program, which provides more than 20 scholarships to student-athletes in Washington State every year, was recently featured in the October issue of the American Association for Justice’s ‘Trial Magazine’

The AAJ, formerly known as the Association of Trial Lawyers of America, is one of the leading organizations for plaintiff lawyers in the United States. According to its website, the AAJ’s mission “is to promote a fair and effective justice system” and “ensure that any person who is injured by the misconduct or negligence of others can obtain justice in America’s courtrooms.”

“We created the scholar-athlete program to recognize and encourage high school students who excel both inside and outside the classroom,” Davis, a former student-athlete himself, said in his interview with the AAJ. “I realize how much hard work and dedication is required to be an excellent student and a high-performing athlete.”

Each week from January to March, the program honors two high school seniors in the greater Seattle area with a $100 scholarship as recognition of their dedication to excellence and achievements as a student-athlete. A total of 20 scholarships are presented throughout the year to the weekly winners, who then participate in a Sportsmanship Essay Contest for the grand prize of two individual $1,000 scholarships.

Since its inauguration in 2009, the program has provided tens of thousands of dollars in scholarships to almost 100 students across Washington State. Though the program is young, Davis hopes that his firm’s efforts will continue to provide support to students as they begin their journey through the world of higher education.

“To have the program featured in Trial Magazine is a great honor for me, and hopefully the article will get the word out to more people about what we’re doing with it,” Davis added. “I am extremely fortunate to be in the position to run this program and recognize local student-athletes for their hard work and success.”

To be eligible for the DLG Scholar Athlete Program, contestants must be a high school senior at a Washington State high school and maintain a GPA of 3.0 or higher while also making significant contributions to his or her corresponding sports team. Additionally, there are no restrictions for who may nominate a student-athlete for the program.

Anyone interested in learning more about the program should visit the DLG Scholar Athlete Program website, which also provides links to nomination and application forms. The website also hosts a timeline of the program and information on contest winners throughout the previous years.

Christopher M. Davis, founder of  Davis Law Group, has been a licensed attorney in the state of Washington since 1993. He has tried dozens of personal injury cases to verdict and has successfully handled and resolved hundreds of accident claims. He has been a Washington Super Lawyer' for seven years in a row for his expertise and success in litigating personal injury claims. You can learn more about the firm by visiting: http://www.DavisLawGroupSeattle.com.