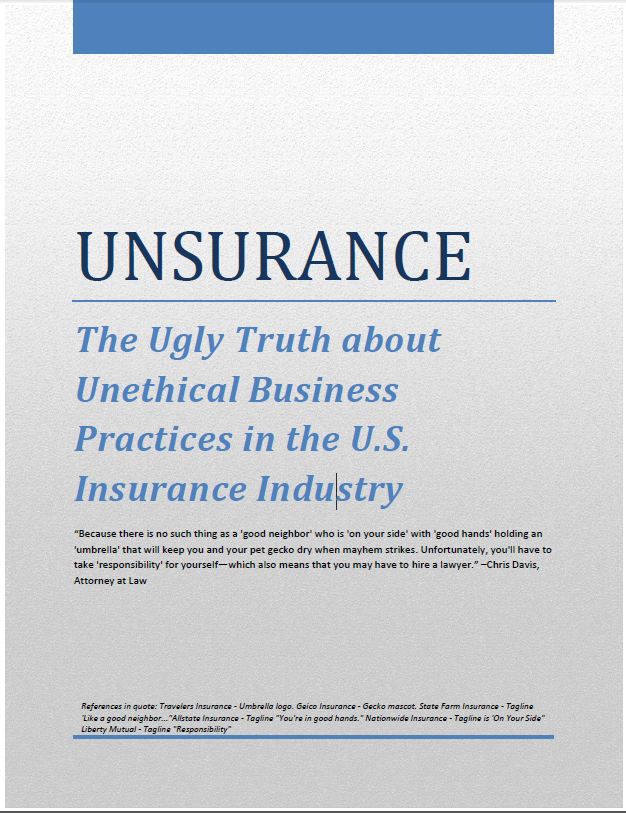 Attorney Chris Davis, author of several books in injury law, has published a report that outlines the unethical business practices that are rampant in the U.S. insurance industry.

In an effort to better educate consumers about the unethical business practices that are widespread throughout the U.S. insurance industry, attorney Chris Davis and the Davis Law Group are proud to announce the release of “Unsurance: The Ugly Truth about Unethical Business Practices in the US Insurance Industry,” a free, downloadable report that highlights and explains the various tactics that accident victims are likely to encounter when pursuing a claim.

The report, which is available in PDF format on the Davis Law Group website, cites various studies and investigations into the insurance industry that expose the profit-focused companies that provide insurance coverage to millions of Americans every year.

“Insurance companies see profits of nearly $30 billion each year, yet they fight tooth-and-nail with their own paying customers as soon as a claim is made,” says Davis, who has represented countless accident victims throughout his legal career. “These corporations take pride in frustrating policyholders into settling for low-ball offers, and it’s really unfair to those who are unaware of their rights.”

Examples of some of the unethical business practices covered in Davis’s report include misleading advertising, companies denying valid claims for reimbursement and practices of outright fraud in order to maximize profitability.

Davis says he hopes that releasing this report and others like it will encourage Americans to gain a better understanding of their own insurance policies, which can pay significant dividends in the event of an accident.

“If consumers have an accurate understanding of the terms of their own insurance policies, it makes it more difficult for the insurance companies to use these tricks during the negotiation process,” Davis added.

Additionally, Davis has written a series of informational guides designed to educate victims of various types of accidents about their legal rights and the personal injury legal process. The books are available online through Amazon.com and other retailers, but Davis is offering them free to Washington residents for a limited time.

Christopher M. Davis, founder of the Davis Law Group, has been a licensed attorney in the state of Washington since 1993. He has tried dozens of personal injury cases to verdict and has successfully handled and resolved hundreds of accident claims. He has been a Washington ‘Super Lawyer' for seven years in a row for his expertise and success in litigating personal injury claims.