What You Should Know About Washington's ‘Vulnerable User Law’ 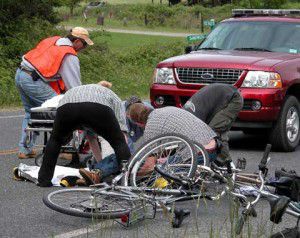 Washington state has enacted a number of laws aimed at improving traffic safety and reducing the frequency of serious injuries and fatalities that can result from car accidents.

Crashes involving pedestrians, bicyclists, people on scooters and in wheelchairs, and so on are a particular point of emphasis due to the higher risk of injury to people in those situations.

That’s why back in 2011, lawmakers in Washington state (with the support of the Cascade Bicycle Club and other advocacy groups throughout the state) worked tirelessly to pass the Vulnerable User Bill. It was a landmark bill that would go on to make a significant positive impact on how accidents resulting from negligent driving are handled.

Under the Vulnerable User Law, ‘vulnerable road users’ – i.e. bicyclists, pedestrians, people on motorized wheelchairs or scooters and others – are provided with a higher level of protection by the simple fact that drivers who commit a negligent traffic infraction and injure a vulnerable user will face much stricter fines and punishments. According to RCW 46.61.526:

“A person commits negligent driving in the second degree with a vulnerable user victim if, under circumstances not constituting negligent driving in the first degree, he or she operates a vehicle in a manner that is both negligent and endangers or is likely to endanger any person or property, and he or she proximately causes the death, great bodily harm, or substantial bodily harm of a vulnerable user of a public way.”

According to the RCW, a vulnerable user of a public way includes, but is not limited to:

If a driver is guilty of committing a negligent traffic infraction – such as speeding, using an electronic device behind the wheel, or running a traffic signal – then he or she will face an automatic fine of up to $5,000 and a 90-day suspension of his or her driver’s license.

Since the Vulnerable User Law has been in effect in Washington state for nearly a full year now, there has been some time to evaluate the effectiveness of the law and for experts to speak their minds about what more can be done to protect bicyclists, pedestrians, motorcyclists and other vulnerable road users.

A recent blog post by the Cascade Bike Blog – operated by the Cascade Bicycle Club – highlights some of the frustrations that vulnerable users and safety advocates are facing with the implementation of the Vulnerable User Law. Among the challenges is the simple fact that many law enforcement officers and much of the judiciary system are unaware of the laws and are therefore not enforcing them properly.

In their blog post, Cascade highlights one particular bicycle accident case in which a female bicyclist was critically injured after an SUV ran a stop sign and crashed into her. The woman's injuries were so severe that she had to be transported directly to a nearby hospital and spent nearly a week being treated for her injuries. At the end of it all, she was facing nearly $100,000 in medical bills as a result of the bicycle accident.

But the woman later found that the driver had not been cited at all at the scene of the accident, despite the fact that she ran a stop sign and was clearly at fault. Once the woman finally contacted the police officer who responded to the accident, the officer was reportedly non-cooperative and was unfamiliar with the Vulnerable User Law. After the victim and her family pleaded their case, prosecutors finally filed charges against the driver for failure to yield, driving without insurance and negligent driving in the second degree involving a vulnerable user.

However, the court eventually dismissed the vulnerable user charge against the driver based on ground that procedure was not followed properly. The victim and her attorneys are currently appealing that decision, but the point is that this was clearly the exact type of accident that the Vulnerable User Law was designed for, yet it has failed to be effective because it was not enforced appropriately.