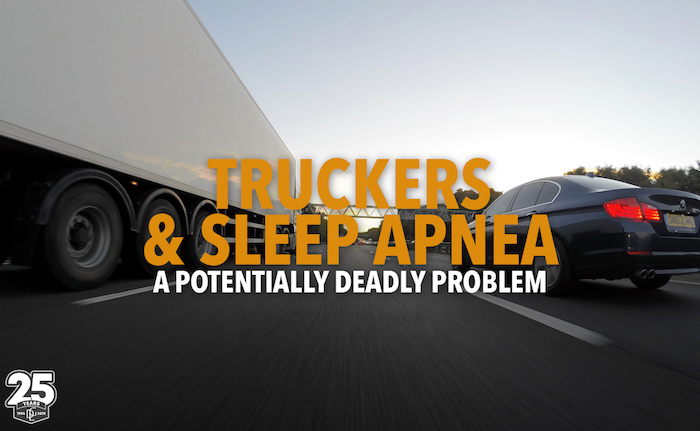 It is common knowledge that fatigue is a leading cause of semi truck crashes. And while this fact is repeated across the internet, many do not know why these truckers are so tired.

Of course, many trucking companies will pressure their drivers to log extremely long hours in the name of delivering a load on time. Truckers have strict regulations on how many hours they can drive, and breaking these laws can carry tough penalties.

But a new cause of fatigue for truck drivers is receiving more attention, a problem that could be costing Americans hundreds of millions of dollars and putting lives at risk — sleep apnea.

What is Sleep Apnea?

Sleep apnea is a sleep disorder in which breathing repeatedly stops and starts. These pauses in breathing can last at least 10 seconds or more and can occur up to 400 times a night. During these pauses, the brain, and the rest of the body, may not get enough oxygen.

Truckers are at serious risk for sleep apnea. Many live unhealthy lifestyles (poor diet, overweight, minimal exercise, etc.) and have a family history of sleep apnea. And while sleep apnea must be diagnosed by a doctor, loud snoring, morning headaches and excessive sleepiness are all warning signs.

One study found that about one-third (28 percent) of commercial truck drivers have mild to severe sleep apnea. That

Obviously sleep apnea affects a person’s sleep. Someone with sleep apnea may think they got a full night’s rest, when in reality they were awake potentially hundreds of times during the night.

Because of this, truck drivers with sleep apnea are not as alert during the daytime. Their performance may dip due to the lack of restful sleep, putting them at an increased risk of crashing. Untreated sleep apnea makes it difficult to stay awake, focus your eyes, and react quickly while driving.

One study by the National Transportation Safety Board found fatigue was a factor in 40 percent of highway crashes. Life or death decisions must be made in a split second, and in the case of a semi truck driver, the consequences are much, much higher.

Sleep apnea may cause a driver to fall asleep behind the wheel, but that’s only one part of the equation. Drivers with sleep apnea may not fall asleep, but their lack of attentiveness and alertness puts them at real risk of a serious crash.

Driving a commercial vehicle requires a driver’s full attention, quick reflexes and an agile mind. Sleep apnea makes it tough to perform even basic tasks behind the wheel.

Truckers can still drive if they have sleep apnea. The Federal Motor Carrier Safety Administration (FMCSA) does not specifically address sleep apnea. While the U.S. Department of Transportation requires that truckers get a medical exam in order to obtain a Commercial Driver’s License (CDL), it is up to the medical examiner whether the driver needs sleep apnea testing, and whether the sleep apnea will interfere with the driving.

State laws regarding sleep apnea vary, so check with your local DMV to see sleep apnea regulations in your state.

A motor carrier can’t allow a driver to operate a commercial motor vehicle if the driver has a condition such as sleep apnea that would affect his or her ability to safely operate the vehicle.

A driver with sleep apnea should be treated by a doctor. They should not drive if they are not being treated. Unfortunately, as many as 70 million people in the U.S. have a sleep disorder, and up to 90 percent of them are undiagnosed or untreated

While the risk posed by truckers with untreated sleep apnea is extremely serious, many trucking companies are unwilling to increase testing. Proposed laws that would require medical fitness testing and sleep apnea screens have failed to pass, sabotaged by trucking company lobbyists hoping to keep costs down.

But until truck drivers are subject to tougher regulations regarding sleep apnea, drivers will continue to take the road fatigued — and innocent people will be put at risk.

Accidents involving semi trucks are often devastating, and the injuries suffered are often catastrophic. Our Washington state truck accident lawyers know what your family is going through, and will work tirelessly on your behalf to get you the justice you deserve.

Attorney Chris Davis has the unique experience necessary to handle these complex cases. Trucking companies will vigorously fight these cases, and your attorney needs to know the ins-and-outs of the laws that govern these companies.

For a free case evaluation with the team at Davis Law Group, contact us at (206) 727-4000, use the chat feature below or fill out the form on this page to get started.