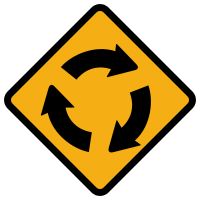 Across the United States city managers and officials look to Seattle as a model of success for its implementation of residential rotary traffic islands (aka traffic circle, roundabout) to prevent traffic accidents.  There are literally thousands of traffic circles in Seattle and more are constructed each year.  Roundabouts have reduced residential neighborhood accidents at uncontrolled intersections by more than 70 percent.

What is a traffic circle, roundabout or rotary traffic island?

Traffic circles are a great alternative to dangerous uncontrolled intersections.  Roundabouts require approaching traffic to enter at a slow speed and yield to the vehicle that arrives at the circle first and/or is already in the circle.  The intent is to keep traffic flowing in a counter-clockwise direction. Residential traffic islands are designed to be just large enough to force the motorist to travel beyond the adjacent curb line, which ensures a lower appropriate speed for navigating the intersection, but not necessarily a full stop.

Despite the fact that vehicles typically travel at lower rates of speed through residential neighborhoods, crashes that happen at traffic circles can still cause major vehicle damage and severe injuries to drivers and passengers.
Typically collisions at or near traffic circles have one of the following causes:

Who Has The Right of Way at a Traffic Circle?  What is Washington State’s Roundabout Rule?

Washington State’s traffic circle law (RCW 46.61.135) clearly states that "a vehicle passing around a rotary traffic island shall be driven only to the right of such island."  Thus a vehicle that causes an accident by navigating to the left of a roundabout is clearly at fault.

Drivers should use caution when approaching a roundabout, slow down and watch for pedestrians in the crosswalk.   Drivers should yield to those vehicles that are already in the roundabout and they should not stop while navigating through the traffic circle.

Those who have been severely injured in a traffic circle accident or roundabout collision would be well advised to quickly hire an attorney that can provide them with competent legal representation.  These types of accidents often have no witnesses and many times the police are not called.  Without eye witness statements or a police report naming the at-fault party the insurance companies of the drivers involved will often dispute liability.  To ensure that the at-fault driver’s insurance company gives you fair and reasonable compensation for medical bills, lost wages, property damage, pain and suffering, etc. you will need to hire a lawyer.