Red Light Camera Systems: For Profit Or For Safety? 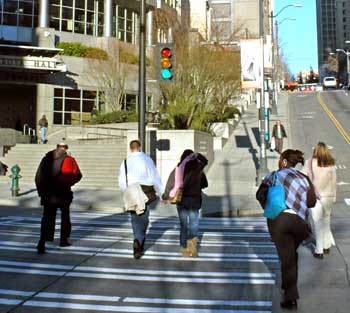 More and more red-light camera systems are being installed in cities. This is leading many people to believe that local governments are putting profit over traffic safety, according to a new study by a national public interest advocacy group.

The contracts with the red-light camera systems restrict police from lengthening yellow signals, and taxpayers have to pay more to terminate contracts early.

"The most problematic contracts require cities to share revenue with the camera vendor on a per-ticket basis or through other formulas as a percentage of revenue," the group says. "In other words, the more tickets a camera system issues, the more profit the vendor collects."

There are about 700 communities that have deals with these companies, which have increased as the recession has been difficult for local government to seek revenue. The funding helps teachers, firefighters and police officers.

The report explains these deals with red-light camera systems prevent local governments from acting in the best interest of their citizens. When contracts are involved, it is very difficult for the government to have power and enforce traffic regulations. It puts more focus on revenue, rather than traffic safety.

A huge part of the debate includes the duration of the yellow-light signal. If the yellow light is longer, there is more time for them to react, which reduces the amount of violations.

"However, some contracts potentially impose financial penalties on the city if traffic engineers extend the length of the yellow light at intersections, which would reduce the number of tickets the systems can issue," the report says.

Some people, however, do believe these systems implement safety.

" (Cameras) are a highly effective way to reduce red-light running and reduce crashes, especially serious crashes, at intersections. … The most effective program would be one where no tickets would be issued because no one is running a red light." Anne McCartt, senior vice president for research at the Insurance Institute for Highway Safety and a proponent of automated enforcement, said.

Actions speak louder than words, and the actions of our lawmakers have the general public questioning whether their ultimate goal is to reduce the frequency of serious car accidents or to increase revenue for the government. Many vendors of the traffic law enforcement industry have many lobbyists whose agenda is to kill a bill that would require longer yellow lights.

"This report is going to open a whole new, robust dialogue about how we should both provide public safety by using photo enforcement and about how it should be managed to protect the public interest," says Leslie Blakey, executive director of the National Campaign to Stop Red Light Running, an advocacy group initially funded by the photo enforcement industry.