All-way-crosswalks, also known as pedestrian scrambles, X-crossings, diagonal crossing, or a Barnes Dance are a pedestrian crossing system that stops automobile traffic in all directions to allow pedestrians to cross the intersection in every direction possible, even diagonally.

Why Do Cities Have Diagonal Intersections? 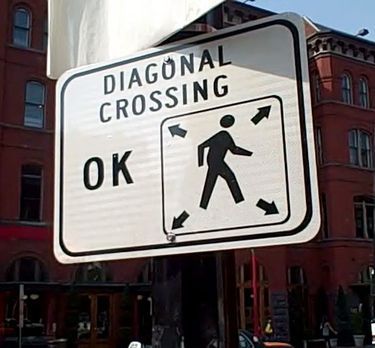 By separating pedestrians and vehicular traffic, the goal is to increase pedestrian safety by not permitting drivers to take free right hand turns. In theory, this will protect pedestrians from inattentive driver’s who do not see the pedestrian in the crosswalk.

An independent consultant’s report concluded that all-way-crosswalks would save pedestrians about twenty seconds in crossing time, although it would add a significant delay for cars and buses. Despite their convenience to pedestrians, these crosswalks have been deemed inefficient by traffic engineers.

Because they stop traffic in all directions rather than allowing partial vehicle movement, they create congestion and delays.

Under some circumstances, x-crossings can decrease safety, as drivers may disobey signals due to significant increased waiting time. Similarly, with longer waits, generally seen as two light cycles, pedestrians may disobey the traffic laws and cross without a signal.

Another challenge presented by the pedestrian scramble model is eliminating the ability to synchronize timing with adjacent traffic signals if they do not have an all way crosswalk. This also leads to traffic congestion and delays.  But most importantly, drivers that either ignore the signals are simply don’t realize that a ‘right-on-red’ turn is not allowed can put pedestrians at risk.

Although these crosswalks are implemented to increase safety and efficiency, one can see there are major pitfalls in this crosswalk design, which can lead to further danger and delays. In some metropolitan areas ‘pedestrian scrambles’ have reduced injuries from pedestrian accidents by as much as 40%.

However, many major cities, such as Denver, have eliminated ‘Barnes Dance’ style crossings for both traffic management and safety concerns.

Motorists that either blatantly ignore the ‘No-Right-On-Red’ rule or who are unfamiliar with the ‘Barnes Dance’ model are in collisions with pedestrians every year.  As with other types of pedestrian accidents, injuries can be severe or fatal.