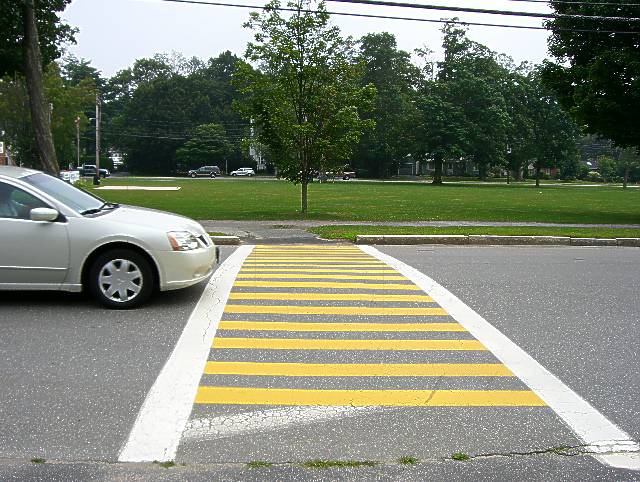 Crosswalks often provide pedestrians with a false sense of security while crossing a road. The truth is that many motorists do not slow down for crosswalks, leaving pedestrians extremely vulnerable to being hit.

Many crosswalks are also insufficiently marked, rendering them useless. Without flashing lights, stop signs, or other warnings to alert drivers, pedestrians are left to fend for themselves while crossing the street.

Many cities are beginning to design intersections and roads with pedestrians in mind. For a long time that was not the case. For slower walkers, including the elderly and people crossing with children, crosswalks can spell disaster. In fact, accidents in crosswalks are one of the most common types of pedestrian accidents.

If you have been seriously injured in a pedestrian accident in a marked or unmarked crosswalk, seek the advice of a legal firm thoroughly experienced in the specific complexities of pedestrian-related cases. Pedestrian accident attorney Chris Davis and the legal team at Davis Law Group, P.S., can clearly explain your legal options and handle the critical details associated with your case while you focus on your recovery and well-being.

For over 25 years, LADOT's crosswalk installation practice has been greatly influenced by a study published in August 1970 by Bruce Herms of the City of San Diego titled “Pedestrian Crosswalk Study: Accidents in Painted and Unpainted Crosswalks.” In the San Diego study, pedestrian accidents were investigated at 400 intersections over five years. Each of these intersections had two unprotected crosswalks-one marked and one unmarked-crossing an arterial roadway. Both of these crosswalks were legal crossings by definition in the California Vehicle Code.

An "unmarked" crosswalk is a legal crossing approximately perpendicular to the roadway that does not have painted lines or special surface material to designate the prolongation of the sidewalks of an intersecting cross street. The San Diego study concluded “in terms of use, that approximately twice as many pedestrian accidents occur in marked crosswalks as in unmarked crosswalks."

Weighing the Pros and Cons

Recognizing that there are both advantages and disadvantages to marking crosswalks, the San Diego study recommended, in part, that “Existing crosswalk warrants should be reviewed and updated. Special consideration should be given to pedestrian channelization needs, nighttime illumination, vehicle approach speed, and motorist inability to see pedestrians or the crosswalk at the critical safe stopping distance." The study further suggested that "Existing crosswalks should be re-evaluated to see whether they meet the revised warrants."

LADOT has often referred to the San Diego study to justify the removal or denial of the installation of marked crosswalks at unprotected locations. For purposes of this report, the term "unprotected" refers to a legal crossing at an intersection where stop signs or a traffic signal are not in place to control vehicles on the street that the pedestrian is crossing. By removing marked crosswalks at locations where they were not deemed appropriate, LADOT was seeking to reduce pedestrian-related accidents.

However, citizens and the media have challenged this practice and questioned whether the removal of crosswalks was improving safety or creating an unfriendly pedestrian environment. In recent years, opponents of this practice have become more vocal. They view the San Diego study as antiquated, since the data is from a report completed a generation ago. Although more recent studies appear to support the findings of the San Diego study, they may not be as well researched or are conducted in cities that the critics view as not representative of Los Angeles.

For a number of years, it has been the practice of LADOT to install marked crosswalks at unprotected locations in special situations. Generally the circumstances include locations where there is a need to identify a preferred crossing point or where there is frequent pedestrian usage, such as at bus stops, institutional buildings, or active retail areas. Where these circumstances are not present, painted crosswalks are not installed nor reinstalled when they are removed due to a street resurfacing.

The LADOT follows the policies of the State of California Traffic Manual, which states:

Where marked, unprotected crosswalks are installed or reinstalled following street resurfacing, a full complement of traffic controls is also included to advise motorists to be alert for pedestrians. Advance pedestrian warning signs and pavement markings, double-posted pedestrian warning signs at the crosswalk itself and a "no stopping" zone in advance of the painted crosswalk are all installed. The length of the parking prohibition is based on the safe stopping distance required for a motorist approaching the crosswalk to see a pedestrian at the curb line. Ladder-style markings are now being included at uncontrolled locations to enhance the visibility of the crosswalk.