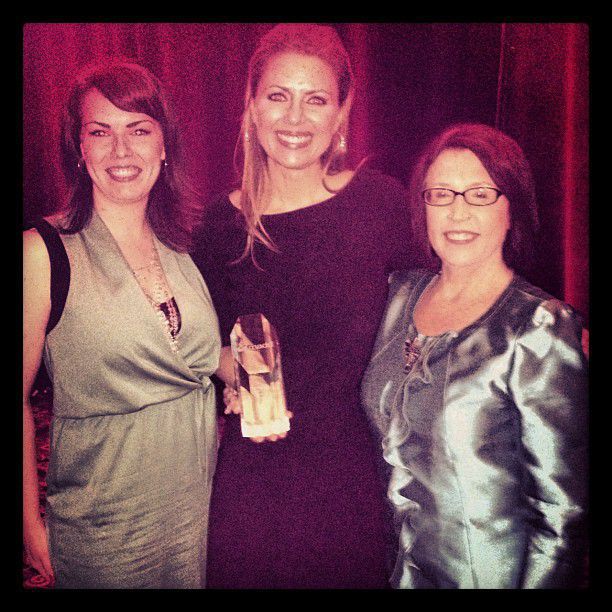 The conference program said to “wear your funkiest shoes…to celebrate the accomplishments of MADD’s best and brightest.”  I had heard about the funky shoes tradition just a week before the conference.  And I had been told that MADD CEO Debbie Weir is the biggest fan of this tradition.

Not wanting to be left out, the weekend before the conference I worked hard to create MADD-inspired funky shoes for Yulee and I.  I felt certain that sticking with the drunk driving prevention theme was probably critical.  So I bought some inexpensive platform pumps, whipped out my Mod Podge and acrylic paints and got started.  I created shoes that looked like Mercedes Benz cars adorned with MADD license plates, MADD bumper stickers, and MADD red ribbons.

Yulee and I put on our little black dresses and our funky shoes and headed to dinner.  To say that our shoes were a hit would be an understatement.  Everyone loved our shoes.

Along with Amy Ezzo, we arrived 15 minutes late.  Everyone was already seated.  We looked for a table with empty seats near the front and got really lucky—we were right next to the CEO’s table and the stage.  I thought our luck was extraordinary.  I learned later that it wasn’t luck.

I had seen a lists of President’s Award Winners in the back of the conference brochure and didn’t think there were going to be any surprises.  But I had neglected to notice that the names in the program were from the 2010 conference, not 2012.

So you can imagine my surprise when about half way through the evening when they were preparing to announce the winner of the Chapter of the Year Award I saw pictures of the MADD Washington staff up on the jumbo-tron-like screens on either side of the room.  I grabbed Amy Ezzo’s arm and shouted
“that’s us!”  She said, “I know, congratulations Mischelle.”  And yet again, I started crying uncontrollably.

I could not believe it.  Then I began to freak out a bit as I realized that I was expected to walk on stage and accept the award on behalf Washington State.  So, with napkin in hand, wiping tears and smearing mascara from my face I headed onto the stage.  My funky MADD shoes were killing me and I could barely walk.  Just a few moments before I had used a MADD conference lanyard to pull my hair back into a ponytail and I was sure it would fall out at any moment.  And I thought to myself, ‘good thing I didn’t leave to go to the bathroom’.

Then halfway up the ramp I nearly froze.  I was suddenly mortified with shame.  I thought about how disappointed I was that Stacey, Betty, Marsha, Joan and Linda were not here to share this moment.  They have been with MADD much longer than I have and some of them have lost close family members to drunk driving.  I should not be the one on stage with Jan Withers—my MADD teammates are the ones who should be here, not me.  But as I walked up I knew that I had to do my best to represent them and make them proud.

Thank God for smart phones.  As soon as I got back to the table I started texting, emailing and posting comments on Facebook.  I wanted to let the girls back home know that we, all of us, had received this award.  I wanted to make them a part of this glorious moment.  Thankfully technology and social media made it possible to include them.