Brain injuries are common among war veterans. While body armor helps fight against injury, long-term effects of head injuries are unknown. A researcher found a high rate of mild cognitive impairment, or “pre-Alzheimer’s” in some of the studies concerning retired pro-football players.

“Even a concussion or a mild brain injury can put you at risk," said Laurie Ryan, a neuropsychiatrist who used to work at Walter Reed Army Medical Center and now oversees Alzheimer's grants at the U.S. National Institute on Aging.

The studies, reported Monday at the Alzheimer's Association International Conference in France, challenge the current view that only moderate or severe brain injuries predispose people to dementia.

"Don't panic - this doesn't mean that every soldier or student athlete who has had a concussion is in danger. Pro-football players and boxers "are almost a different species from us" in terms of the repeated blows they take to the head, said William Thies, the Alzheimer's Association's scientific director.

However, it does signify that you should avoid get a concussion. That is why it is so important to wear helmets, seat belts and to fall-proof your home. Approximately 1.7 million brain injuries happen each year in the United States.

"What the people who have had a head injury and read this should do is to exercise and eat right and take their medicines and take their aspirin and do meditation to reduce stress - reduce risk factors that are modifiable," he said.

While this wide scale study is great, it does not prove a link between brain injuries and dementia. There needs to be more definitive studies in order to get absolute results.

"It's by far the largest" study of brain injury and dementia risk, she said. "It's never been looked at in veterans specifically."

The study looked at medical records of 281,540 veterans from 1997 to 2000. All were at least 55-years-old and none had been diagnosed with dementia at the start of the study.

Over the next seven years, more than 15 percent of those who had suffered a brain injury were diagnosed with dementia versus only 7 percent of the others - a more than doubled risk.

Ryan Lamke, 26, a medically retired Marine who lives in suburban Washington, D.C. who suffered a traumatic brain injury from multiple blast exposures in 2005 in Iraq.

"I'm diagnosed as a moderate (brain injury) but it feels like a mild," said Lamke, who relies on electronic calendars and other gadgets to stay organized. He's a student at Georgetown University and works part-time as a government relations intern for a private firm.

"I have to read for twice as long as my classmates" to accomplish what's needed, he said. "I've not found a doctor so far who can give me a true understanding of what's going to happen 20 or 30 years down the road."

The study does not want people to live in fear, rather just be aware of the possibility.

"While we don't want people frightened to think they're going to be permanently impaired, a mild traumatic brain injury does not necessarily mean" no long-term problems, said Dr. Gregory O'Shanick, a psychiatrist and chairman of the board of the advocacy group Brain Injury Association of America.

The personal injury lawyers at Davis Law Group, P.S. see many people who have been in accidents resulting in traumatic brain injury. Brain injuries are almost always irreversible and can have life changing effects. Therefore, it is so important to always wear your seat belt in the car, wear your helmet on your bicycle or motorcycle and do not take risks that can cause brain injury. This should be just another reminder to always be safe. 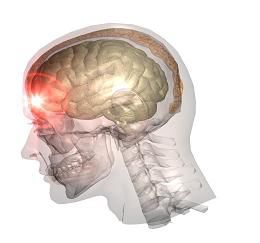