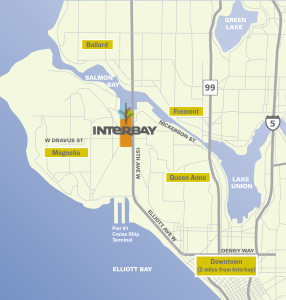 Seattle’s Interbay neighborhood connects downtown to the Queen Anne, Magnolia and Ballard neighborhoods via an industrial core that has become popular for high tech companies such as Expedia, Amazon, F5, Big Fish and others.  The Interbay area runs through a valley between Queen Anne Hill to the east and Magnolia to the west.  Both Smith Cove and Elliott Bay run along the coastline.

Groups like the Interbay Neighborhood Association have been working with other neighborhood associations, local Interbay business owners, and the City of Seattle to create new and improved safety strategies for the area.  The city’s Ballard Interbay Land Use Corridor Study worked with key stakeholders to identify specific areas of potential improvement.

The high traffic roadways that connect commuters to the local businesses and nearby neighborhoods have seen a dramatic increase in traffic over the last several years.

The City of Seattle recently required Expedia pay for traffic signal improvements in the area after the company announced plans to relocate 4,500 employees to the area.  Initially the new Expedia offices will add approximately 2,900 new daily car trips to the area and eventually swelling to 4,000 daily trips by 2031.  The majority of this traffic will drive through 15th Avenue West/Elliott Avenue West.

The area has already seen an increase in the number of automobile collisions and pedestrian accidents.  Minor accidents happen on almost a daily basis.  But there have been some more serious accidents in the area.

In December 2018 a man was struck and killed while crossing 15th Avenue West near West Wheeler Street.  Just six months before an elderly man using a cane to walk was struck on 15th near the Interbay Whole Foods store.

And in October 2018 one person was killed in a two vehicle crash near the intersection of Thorndyke Avenue West and 23rd Avenue West.

Davis Law Group’s attorneys have the experience and expertise needed to help Interbay car accident victims and their loved ones.  Call for a FREE consultation at (206) 727-4000.