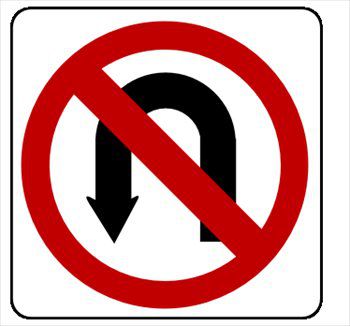 When a driver maneuvers a motor vehicle to perform a 180 degree turn which reverses the direction of the vehicle’s travel it is known as a u-turn—it is called a "U-turn" because the tactic looks like the letter ‘U’.  Occasionally divided highways have U-turn ramps in order to allow restricted law enforcement and emergency vehicles in urgent situations.

U-turns are illegal in many states and in certain types of driving conditions and/or terrain for good reason.  When a driver unexpectedly makes a 180 degree or U-turn it can create a situation that is dangerous for other vehicles and pedestrians.  Drivers that make U-turns in busy intersections, highways or roads are putting the public at risk.

In Washington State, U-turns are permitted in those areas that are clearly marked and/or areas where negotiating a U-turn can be executed safely.  Under RCW 46.61.295 “the driver of any vehicle shall not turn such vehicle so as to proceed in the opposite direction unless such movement can be made in safety and without interfering with other traffic.”

Every year thousands of motor vehicle accidents are caused by drivers making illegal U-turns or negligently attempting to negotiate a legal U-turn.  U-turns can cause head-on collisions and t-bone accidents which are particularly dangerous and often result in serious and sometimes fatal injuries.

Legal Rights of Victims of a U-Turn Accident

The victim of an illegal U-turn accident has the right to seek compensation from the at-fault driver.  Medical bills, lost wages, property damage, other harms, and pain and suffering damages can all be compensated for through a fair and reasonable settlement or jury award.