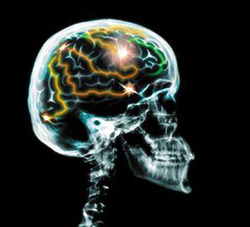 The medical community has yet to come to a consensus as to whether one can predict permanent brain damage from a specific trauma. Still, there are a number of different health factors doctors take into consideration when trying to predict if a patient may have suffered a traumatic brain injury (TBI) as a result of an accident.

However, it is important to keep in mind that a positive test on one or more of the symptoms below is in no way a conclusive way of telling that a brain injury has occurred.

In the human body, nerve cells communicate with one another both electrically and chemically. One nerve sends an electrical discharge along its axon to stimulate another distant nerve. The actually stimulation is done chemically.

When the electrical discharge reaches the end of the axon, the electricity causes the axonal tip to spit a chemical "neurotransmitter" at receptor sites on the next nerve cell. All this takes place in a nice orderly fashion.  However, during a seizure, every nerve cell in the brain rapidly fires electrical discharges at one another resulting in chaos. This causes the patient to lose fall down, consciousness, and convulse. In a sense, the brain short circuits during a seizure.

The same uncontrolled discharges in a focal area of the brain may cause the patient to experience or do what function that focal area normally controls. These "focal" or "partial" seizures may manifest as recurrent bouts of numbness, fear, anxiety, a forced memory, jerking of a limb or face, lip smacking, sudden staring spells, or inability to speak.

Typically, the longer an accident victim is unconscious, the more severe the injury. Medical response teams at the scene of an accident tally up what is called a "Glasgow Coma Scale" of the patient’s neurologic status, which can range from a low of 3-deeply comatose- to a normal value of 15. The Glasgow Coma Scale is helpful in predicting a patient's ultimate outcome.

The Glasgow Coma Scale consists of three main components; eyes, verbal, and motor. Each component has at least 4 possible points whereby the medic on the scene assesses the victims conscious and awareness levels. Unfortunately, the lower the score the worse the outlook.

A concussion is an alteration of conscious awareness after head trauma. The combination of symptoms following a concussion is called post concussion syndrome, also know as PCS. PCS is a serious condition and the presence of symptoms should always be treated with care.

Symptoms of PCS include but are not always limited to dizziness, nausea, vomiting, headache, disorientation, forgetfulness, irritability, depression, mood swings, insomnia, and loss of libido. Most cases of PCS resolve after a few months, but approximately one in five of all cases can involve longer term problems.

Memory loss for both events prior to the injury and events following the injury are frequently a sign that head injury has occurred. Loss of memory prior to injury is known as retrograde amnesia.

Because studies have shown that individuals are not good at estimating their own length of amnesia, family members should make note of any anterograde or retrograde amnesia and track its improvement.

A disturbance of brain function indicating something is wrong with both sides of the brain's gray matter. Some common signs of encephalopathy include memory loss, stupor, agitation, confusion, inattention, and inappropriate aggression.  Fortunately, an encephalopathy after head trauma only means the brain is not functioning properly, it in no way means that the dysfunction is permanent.

Pupils are Equal and Reactive to Light

At the scene of a car accident, for example, medical personnel commonly test an individual with a head injury to see if the Pupils are Equal and Reactive to Light or PERL.

Unequal pupils or un-reactive pupils in a comatose patient after a head injury can signify a dangerous rise in intracranial pressure due to issues such swelling, hematoma or hydrocephalus. Lifesaving surgery is often an urgent necessity to relieve the elevated pressure to prevent further damage or even death.

Get Legal Help After A Brain Injury

If you or someone who know has suffered at a traumatic brain injury because of someone else's negligence, and you feel you have a legal case, call our office at 206-727-4000 or use the confidential contact form on this page to request a free legal consultation.

Attorney Chris Davis and the team of personal injury lawyers at Davis Law Group would be happy to speak with you about your legal claim and help you better understand your legal rights and options.