Legal Liability For Accidents Resulting From A Police Chase 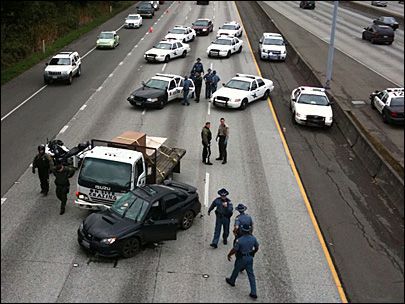 When police officers are involved high-speed pursuits of criminal offenders, the risk of injury or death to innocent bystanders – including pedestrians, bicyclists, other motorists and even people inside of their own homes – grows significantly.

The combination of high speeds and little reaction time puts the public at a disadvantage on the roadways, and police pursuits have actually resulted in serious permanent injury or even death in plenty of instances in the Seattle area.

When police officers are involved in a high-speed pursuit, the person they are chasing is likely a criminal or at least someone with little regard to the law. This often leads to the pursuing officers running red lights and stop signs in order to keep up with the fleeing driver. Unfortunately, this only adds to the already high risk of injury or death to an innocent bystander.

Police department policies regarding proper procedure vary in regards to officers who become involved in a high-speed pursuit. However, there are generally three types of models of policy that are commonly implemented among police departments:

The type of model or approach that a particular police department may employ entirely depends upon various circumstances. For example, the Seattle Police Department is much more likely to employ a restrictive or discouragement model because the busy metropolitan environment significantly increases the chances of injury to an innocent bystander. A city or county located in a more rural setting will most likely have fewer motorists and pedestrians on the road at a given time, making a judgmental model much more appropriate.

Sadly, there have been plenty of examples of police chases gone wrong in the Seattle area and Washington state in general in recent years. In 2010, a police chase eventually led to a wrongful death lawsuit after convicted felon Virginia Ramsey crashed into a vehicle with two people inside while she was fleeing police. The driver, Douglas Simmons, was killed in that accident and the passenger sustained a serious traumatic brain injury (TBI).

Police were actively pursuing Ramsey at the time of the accident that killed Mr. Simmons, and many experts have argued that injuries and fatalities can be avoided if the police officer halts pursuit in dangerous settings. But police chases don’t always have to be actively chasing a fleeing suspect in order for a violent accident to occur.

In November, a man was driving a stolen car in the Des Moines area when police spotted him acting suspiciously and after looking up the vehicle’s license plate number found it had been reported stolen. According to KOMO News, the sheriff’s deputy attempted to pull over the vehicle but the driver attempted to flee and sped away. The news report also says that as the suspect vehicle reached speeds of nearly 70 mph, the deputy ended his pursuit for fear of public safety.

The sheriff’s deputy slowed down to a safer speed but continued driving in the direction he believed the car was heading, despite losing sight of the vehicle. Not long after the officer ended his pursuit, the driver crossed the centerline into oncoming traffic and crashed head-on with a woman who was driving home from work.

In the end, there is very little that an innocent bystander can do to avoid being injured or killed by a vehicle during a police chase. The unpredictable nature and split-second decision making involved in police pursuits indeed puts the public at significant risk of injury or death, and it is up to individual police departments to set official policies that accommodate for the environment and keep the public as safe as possible.