According to the King County Committee to End Homelessness, half of the individuals in King County homeless shelters are children under the age of 18. 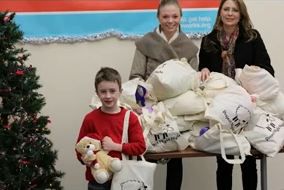 When Seattle attorney Chris Davis and his wife saw a recent 60 Minutes segment describing the 16 million homeless children in the US that are living on the street, in cars or shelters they were inspired to do something to help local homeless kids.

This holiday season Davis Law Group is teaming up with Project Night Night to assemble holiday gift packages for homeless children in the Seattle area. Chris and Mischelle Davis along with the employees at Davis Law Group will assemble gift packages containing a blanket, a stuffed animal, a story book and holiday goodies. They will personally deliver the packages to the children at three nearby shelters: Mary’s Place, YWCA Seattle-Downtown and Union Gospel Mission’s Hope Place.

Chris Davis is a Seattle native and the founder of the Davis Law Group, P.S. He is the author of several books on personal injury and wrongful death law. Chris has been recognized by local and national media (including CNN, NBC, ABC, Fox and CBS) as a legal expert and is frequently asked to offer his opinion on news stories and events. Chris’ wife Mischelle is a former hi-tech marketing and communications executive. In 2007 she left her 15-year career to help her husband revolutionize how his law firm serves and communicates with clients. They are also sponsors of the Davis Law Group School Supplies Gift Program and Davis Law Group Scholar Athlete Program.