In 2012 she attended MADD's National Conference in Washington DC where she was invited to be a speaker to share her experience with other MADD chapters and accept the MADD Chapter of the Year award on behalf of Washington State.

Mischelle is also one of the founding members of MADD's Washington State Advisory Board.  The board provides leadership and strategic guidance to the local state chapter.  The board helps determine how to best implement programs and services to broaden MADD’s operation and funding base and increase capacity through the building of partnerships in Washington State.

Each year the attorneys, paralegals and support staff at Davis Law Group form a walking team for Washington State Mothers Against Drunk Driving (MADD)'s Walk Like MADD fundraising event. Once again as in 2011, 2012 and 2013 our law firm's 2015 Walk Like MADD team took the top prize for the most money raised by a business or corporation. 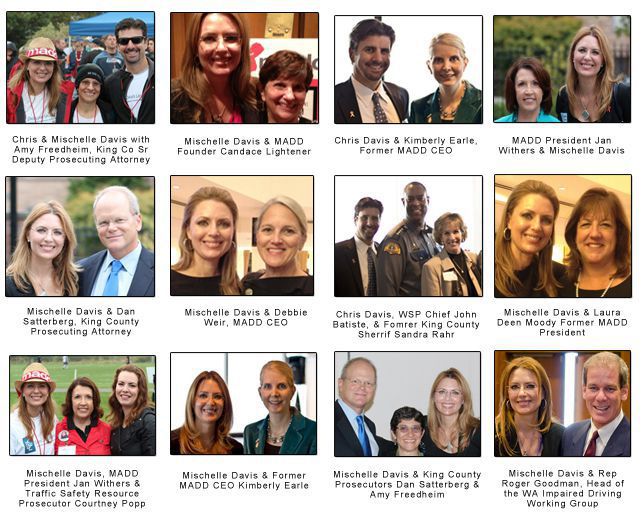 Founded by a mother who lost her daughter in a crash, Mothers Against Drunk Driving (MADD) is the nation’s largest nonprofit working to protect families from drunk driving and underage drinking. The mission of Mothers Against Drunk Driving (MADD) is to stop drunk driving, support the victims of this violent crime and prevent underage drinking. Washington State has a MADD chapter with victim advocates that are ready to provide drunk driving crash victims and their families with the emotional support that they need. MADD welcomes donations that support awareness campaigns and educational programs in our local area.