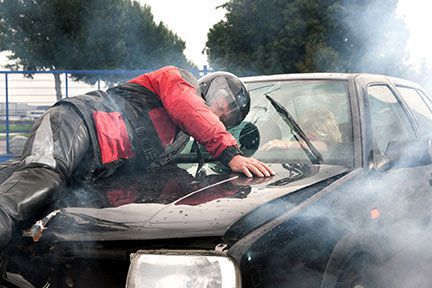 Motorcyclists, even those who wear helmets, are most likely to sustain non-penetrative injuries to the front of the head, damaging parts of the brain responsible for speech and higher functions. Those without helmets may also be susceptible to a penetrating brain injury, in which an object enters the head and skull, damaging the soft tissue of the brain itself.

Study after study shows that the best way to prevent a traumatic brain injury is to wear a helmet approved by the federal Department of Transportation. (Some also carry approval from the Snell Memorial Foundation, a nonprofit organization dedicated to testing the effectiveness of commercial helmets.)

In January of 2006, only four states in the U.S. — Colorado, Illinois, New Hampshire and Iowa — had no law at all requiring motorcyclists to use helmets. Twenty-six others had limited helmet laws, usually ones that require helmets for riders who are under 18 or 21.But even in states without strict helmet laws, riders are still strongly advised that their chances of death or serious head injury are seriously reduced by wearing a helmet.

A rider's failure to equip passengers, particularly passengers who are under 21, with helmets may be considered negligent. And if the helmet is below state and federal standards, poorly fitted, old or has been through a previous accident, that helmet is not safe, may not be legal and will not prevent death, brain damage or another traumatic injury.

Other Brain Injury Risks for Motorcyclists

Even though proper equipment significantly cuts down a motorcyclist's chance of suffering a traumatic brain injury, it is not foolproof. Riders must stay aware of other factors that could lead to an accidental traumatic brain injury, and there are steps that they can take to protect themselves in the event they encounter a negligent driver.

Motorcyclists are advised to check their bikes and equipment for problems before each ride; adjust the suspension and tire pressure of the motorcycle when carrying a passenger; wear boots, gloves and other protective gear; and adjust for changing road conditions.

The cost of an accident that results in a traumatic brain injury can be severe. TBIs lead to brain damage that can range from a mild to severe, and result in life-changing disabilities such as trouble communicating, personality changes, schizophrenia or even a long-term coma.

Accident Victims Should Consult With A Lawyer After A Serious TBI

Because the brain cannot heal itself the way other organs do, these are often lifelong problems that cost tens of thousands of dollars to treat. They also place a severe emotional and financial burden on the injured person's family members. Washington state law permits accident victims who are injured by a negligent party to recover financial compensation for their damages.

If you or someone you know is the victim of a motorcycle accident causing traumatic brain injury, it is essential to seek out an expert in accidents and TBI who can help reconstruct the accident and secure compensation. Call the team of Washington motorcycle accident lawyers at Davis Law Group at (206) 727-4000 to learn more about your legal rights after an accident, and how our attorneys may be able to help.