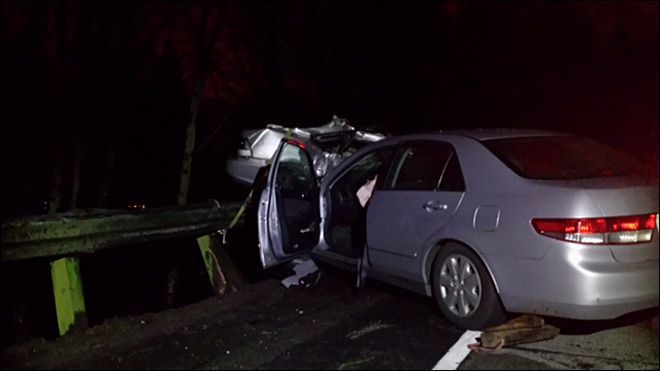 Police believe that street racing may have been the cause of a car accident that killed two people and seriously injured three more in Redmond Friday evening.

According to The Seattle Times, officers received calls about a head-on collision on Northwest 128th Street near Avondale Road NE in Redmond just before 6 p.m. Friday. King County Sheriff’s Office spokeswoman Sgt. DB Gates said an Acura Integra occupied by two people was traveling westbound and crashed head-on with a Honda Accord traveling the opposite direction.

The two unidentified people inside of the Acura were pronounced dead at the scene, according to Gates. An adult woman, adult male, and 4-year-old child – all passengers in the Honda – were injured in the crash and the woman was reportedly taken to Harborview Medical Center in Seattle to receive treatment for her injuries.

“The most important thing to note here is that street racing is dangerous,” said Detective Jason Stanley of the King County Sheriff’s Office. “There are other people on the road. When people choose to engage in street racing, they’re not just risking their own lives, they’re risking the lives of the motoring public just trying to get from A to B.”

Police are still searching for a second vehicle believed to have been participating in the street race, and they have not yet released a description of that vehicle. Investigators are also trying to determine if drugs or alcohol may have also played a role in the crash.

Auto insurance policies often contain exclusions from coverage under certain circumstances, particularly when the insured has knowingly put themselves in a position of risk of serious injury. This type of activity would presumably include street racing, though that would ultimately depend upon the exact language of an individual policy or contract.

An exclusion of coverage on this basis would likely deny coverage to anyone who was a participant in the race, which would appear to have been the occupants of the Honda – if statements from the sheriff’s office in news reports are accurate.

That’s not to say that the injured victims in the Honda would be denied coverage for their injuries, however. The sheriff’s office did not appear to believe that vehicle was involved in the street race, which would not make them willing participants. As long as the at-fault driver(s) have a liability insurance policy, then the victims may be able to pursue a bodily injury claim.

Of course, this case is already very complex and has the potential to get even more complicated as more details about the collision are uncovered. In complex collisions that result in serious injury, it is often beneficial to consult with an experienced Seattle car accident lawyer about legal options moving forward.